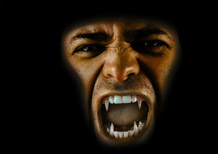 Two hundred years before vampires found their way into novels they were featured in medical journals.

Dracula was based on medical reports of ‘real’ vampires

Vampires, immortalised in Bram Stoker’s Dracula, were born out of real-life accounts of vampires gathered by doctors and surgeons, academic research has revealed.

Two hundred years before vampires found their way into novels – most famously Dracula – they were featured in medical journals as a blood-sucking phenomena that rose from the dead to drain the blood of the living.

Dr Nick Groom, Professor of English at the University of Exeter who has been dubbed the ‘Prof of Goth’, has found evidence that Bram Stoker and other early Gothic authors would have been aware of medical descriptions of vampire activity in Eastern Europe dating back to the 17th century.

In research to be published by Cambridge University Press as part of a new project on Bram Stoker’s Dracula, Prof. Groom records how by the 18th century physicians were investigating reports of undead monsters who gorged themselves on blood. These incidents led to bodies being dug up, decapitated, staked through the heart, and cremated.

He says that passages in Dracula – the late-19th-century Gothic horror novel about a Transylvanian vampire who comes to Britain in search of fresh blood - mirror medical descriptions of how ‘real-life’ vampires are recorded to have behaved. Dracula’s female vampire, for example, makes the same “churning” sound with her tongue as is described in academic medical treatises about the behaviour of the undead. Stoker, in turn, incorporated cutting-edge 19th-century medical research such as blood transfusion technology into his own novel.

Sightings of vampires had been reported in journals and gazettes in Poland and Russia as early as the 1690s. The creatures were supposed to have sucked the blood of humans and animals, and, engorged, blood would flow from their eyeballs, pores, and other orifices. Once dug up, their coffins were said to have been swimming in gore. As a protection, local people advised making bread from this very blood against “contracting vampirism.”

Physicians in the 1730s recorded the physical symptoms of vampire attacks, from shivering and nausea to spasms, nightmares, and death. The vampirism epidemic led to 17 articles in 1732 in professional journals, followed by 22 learned treaties over the next three years published in European centres of learning. By that time the London press had reported that in Hungary there were “dead bodies sucking….the blood of the living, for the latter visibly dry up, while the former are fill’d with Blood.”

Professor Groom, author of The Gothic: A Very Short Introduction (Oxford: Oxford University Press, 2012), is comprehensively mapping the vampire’s pre-history as part of a research project examining the emergence of Gothic literature from early medicine, theology, politics, and criminal law.

According to his research, Stoker and other literary figures who first wrote about vampires drew from medical reports. Indeed, the first vampire novel in English, The Vampyre, was written by the physician Dr John Polidori and was published in 1819.

He believes Stoker, who published Dracula in 1897, would have been aware of much earlier accounts of vampirism as both a “genuine disease” and also a “mass delusion of peripheral and backward communities” in Eastern Europe. These reports include accounts of a rampant plague in Serbia where the dead were rising from their graves to prey on the living, who in turn became vampires.

Medics writing from 1679 also wrote Latin treatises about “grave eating” where the undead were dug up to find they had been eating their own shrouds and even feasting on their own limbs and bowels.

By 1751 the vampire had “become mordantly fashionable”, according to Professor Groom, with the Earl of Sandwich naming a bay gelding racehorse “Vampire”. The image of the blood-sucker was also quickly adopted by political commentators: tax revenue was represented as a way to gratify the “fat gutted vampire” that was the government. Vampires were also a major topic of debate among philosophers and theologians, and even influenced legal thinking.

By the second half of the 18th century the vampire was appearing in English and German literature, subsequently inspiring poets such as Samuel Taylor Coleridge and John Keats. Meanwhile, Mary Shelley alludes to the monster in her anatomical novel Frankenstein as “my own vampire, my own spirit let loose from the grave and forced to destroy all that was dear to me.” Since then it has become an abiding image of the vengeful dead.

Professor Groom said: “For many years vampirism was a serious subject of research: on the one hand it was a terrifying medical disorder, on the other a mass delusion fostered by wretched social conditions. As its popularity rapidly spread across Europe, the image of the vampire changed the way that people thought about political power, theology and philosophy, and legal testimony – as well as supernatural literature.”