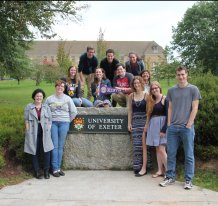 The University of Exeter and Kenyon College are celebrating the 40th anniversary of a successful partnership at a special event in New York City.

University of Exeter and Kenyon College alumni will get together in New York on Monday 17 October 2016 to share memories and to connect with old classmates.

Exeter Kenyon alumni have been sharing their memories and photographs of the programme on a website created ahead of the event.

Marc Millon was on the first year of the programme in 1975. He arrived in Exeter as a 19 year old and says “Exeter was quite simply unlike anywhere I had been in my life before, and I increasingly fell under its spell. It helped that as early as December of that year, I was lucky enough to have already met and fallen in love with the person who I have subsequently spent the rest of my life with, Kim Jordan, then a first-year student in English and Fine Art.”

“It’s clear that the programme has shaped many lives but lots of these stories haven’t yet been told so we very much hope that Exeter Kenyon alumni can help us build the full picture of the last 40 years. We know that the first group of Kenyon students came to Exeter in 1975-76 and we estimate that over the 40 year period well over 500 students have spent time with us in Devon. Many have met friends for life; some have met life partners.” Jo Gill, Associate Dean for International and Development

The University of Exeter’s Vice-Chancellor Professor Sir Steve Smith said: “It is wonderful to celebrate this important anniversary of University of Exeter's oldest partnership in the year that Exeter celebrates its Diamond Jubilee. We look forward to welcoming students from Kenyon for another 40 years and more, and to strengthening our links with Kenyon and alumni from this programme, of which we are extremely proud.”