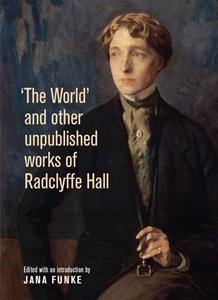 “The World” and other unpublished works of Radclyffe Hall is published by Manchester University Press.

Previously unpublished short stories and a novel by British author Radclyffe Hall have been discovered by a University of Exeter expert.

These materials give new insights into the lesbian writer’s views on sexuality, gender, class, race, spirituality and the First World War.

Dr Jana Funke, from the University of Exeter, is the first academic to research these papers, which are published for the first time this month.

Radclyffe Hall is widely remembered as the author of the 1928 lesbian novel The Well of Loneliness, which was famously censored in Britain and has fundamentally shaped views of lesbian sexuality and identity. After Radclyffe Hall’s death in 1943, her unpublished works were left to her partner, Lady Una Troubridge, who was meant to destroy them. Instead, they were kept and discovered in a suitcase in Rome in the 1990s, when they were bought by the Harry Ransom Center in Texas.

These materials have not been analysed or published until now. The previously unpublished short stories and novel found among the papers by Dr Funke offer entirely new perspectives on Radclyffe Hall’s work. They show that she tested out radically different ways of writing about lesbian sexuality and gender before publishing The Well of Loneliness. Although she was critical of the suffragettes, the materials also reveal that Radclyffe Hall thought carefully about feminist politics. The newly-discovered novel gives insights into her interest in the First World War and its influence on gender roles and sexual relations, especially for men. The short stories also demonstrate Radclyffe Hall’s interest in spirituality and religion, including topics like reincarnation and the survival of the soul after death.

Dr Funke said: “It was a dream to discover and work on these papers and to prepare them for publication. The new materials will allow readers to reconsider The Well of Loneliness, but also, crucially, to discover important new aspects of Radclyffe Hall’s life and work.”

“The World” and other unpublished works of Radclyffe Hall is published by Manchester University Press.