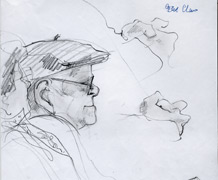 Cornish ‘Poet of the Clay’ Jack Clemo became blind and deaf because of congenital syphilis inherited from his father, a new University of Exeter study has found.

Luke Thompson has worked with the poet’s diaries, letters and manuscripts, as well as friends and family, for his new biography of Clemo, entitled Clay Phoenix. Clemo’s archives are held at the University of Exeter, where Dr Thompson has been conducting his research.

Jack Clemo’s father contracted syphilis when he moved from Cornwall’s clay mining country to work in the copper mines of Butte, Montana. Many Cornishmen travelled to the USA in search of fortune and adventure, but Jack’s father returned broke and syphilitic, contracting the disease from the notorious brothels of Butte. This event informed Jack Clemo’s writing, as well as his life, and among Dr Thompson’s discoveries is an unpublished poem addressing the prostitute from whom his father contracted the disease.

A reliable cure for syphilis was not available until the 1940s, by which time the disease had progressed too far for treatment to save Jack Clemo’s senses and features. His condition was the subject of local gossip, but hasn’t been confirmed until now.

This year marks the centenary of the birth of the great Cornish mystic poet, whose work was inspired by the Cornish landscape, particularly the clay mines of Mid Cornwall.

Jack Clemo’s early upbringing was difficult. His father died in World War 1 in 1917, leaving his mother to raise Jack and care for her disabled sister without an income in the mining landscape.

Dr Thompson, who was studying at the University of Exeter in the Department of English, said: ‘Jack Clemo was one of the most extraordinary poets of the twentieth century. His fusion of sex, faith and the china clay landscape was strange and powerful. The story of syphilis is central to Clemo’s life, and its impact on his poetry can hardly be overestimated.’

Clay Phoenix, was launched on 29 May at the Bodmin Moor Poetry Festival, alongside an album of Jack Clemo’s poems set to music by acclaimed folk musician Jim Causley.