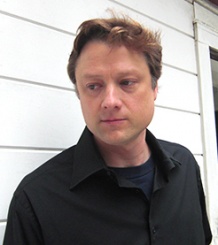 English and Creative Writing lecturer in the College of Humanities at the Penryn Campus, Dr Rob Magnuson Smith, has been longlisted for the 2016 Sunday Times EFG Short Story Award for his short story ‘The Elector of Nossnearly’.

Launched in 2010, The Sunday Times EFG Short Story Awards have a reputation for highlighting the work of established and emerging writers. Alongside 11 other writers, Dr Smith’s short story was longlisted for this highly esteemed award. He stated, 'I am honoured to be longlisted for the prestigious Times prize and very much hope to make it to the next stage. The support from my friends, family, and colleagues at Exeter has been heartening.'

Dr Smith was awarded the Australian Book Review (ABR) Jolley Prize for ‘The Elector of Nossnearly’ in September 2015. His debut novel ‘The Gravedigger’ appeared in 2010 after winning the Pirate's Alley William Faulkner Award and his second novel, ‘Scorper’ was published in February 2015. His short fiction has been recently published in The Clearing, The Literarian, the Guardian, The Istanbul Review, and The Reader.

The Sunday Times EFG Short Story Award is open to any novelist or short story writer from around the world who has been published in the UK or Ireland. Five shortlisted winners will each receive £1000 and the winner will be awarded £30,000, the world’s richest prize for a single short story. The Award is managed each year by the reading charity, BookTrust. The shortlist will be announced in The Sunday Times on 20 March and the winner will be revealed on 22 April at a gala dinner hosted by EFG at Stationers’ Hall in London.

‘The Elector of Nossnearly’ can be read in full on The Australian Book Review website. Subscribers to The Times website can read the all of the longlisted stories on The Sunday Times website. Keep up with the Award via Twitter and Facebook.