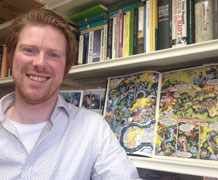 This new research project has been organised by Dr Paul Williams (pictured).

More than a hundred pieces of original art from British graphic novels will be on show as part of a new University of Exeter research project.

The original art, along with books and innovative displays, will be exhibited as part of a two-year project funded by the Arts and Humanities Research Council. The project runs until August 2016 and will highlight little-known graphic novels from the 1970s.

The exhibition, called The Great British Graphic Novel, will outline the history of the genre, and show the huge range of graphic novels coming out of the UK, with writers and artists creating romances, comedies, autobiographies, literary adaptations and political thrillers for readers of all ages.

While many exhibits are from the late 1970s to the present day, art going back to the eighteenth century will be shown alongside more recent material to underline the dialogue between creators from the past and present.

The exhibition will show how the seminal graphic novel Watchman, written by Alan Moore, evolved from Dave Gibbons’s original pencilled and inked art to John Higgins’s coloured pages to the printed version.

Organiser Dr Paul Williams, Senior Lecturer in 21st Century Literature in the Department of English, said: “From comics without words to innovative combinations of text and image, graphic novelists have amused, terrified, educated and enthralled, taking their readers to parallel worlds, worlds long past and worlds we can only just imagine.

“Visitors to the exhibition will see that Watchmen, and other major graphic novels such as Alan Moore and David Lloyd’s V for Vendetta and Posy Simmonds’s Gemma Bovery, are part of a much bigger and older body of texts.

“British publishing faces significant challenges in the twenty-first century but graphic novels are one of its success stories. Digital media is inspiring a new generation of graphic novelists and some of the work on display strains at the limits of what we think a comic or a book might look like.”

The Great British Graphic Novel exhibition will be shown at London’s Cartoon Museum from 20 April to 24 July 2016.