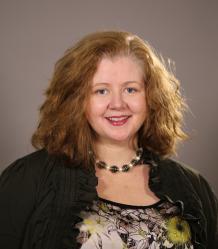 Kara Reilly is an author, theatre historian, director, and dramaturg. She specialises in intersections between the history of theatre and the history of science and technology, adaptation studies, and gender/ queer theory.

Her current monograph project Ghosting the Operating Theatres: Performing the Body as an Object on the Contemporary Stage examines contemporary stagings of historical ‘freak’ bodies in museums and onstage. All the re-staged ghosts in the volume are people who lived and worked in the UK between 1752 and 1832. This eighty-year time span is significant, because in 1752 the British government passed the Murders Act, meaning anatomists could use the cadavers of murderers for dissection; in 1832 the government passed the Anatomy Act. This allowed anatomists to use paupers’ corpses for dissection.

Throughout the volume Reilly asks an impossible research question: when did the body become an object?  Through the medium of theatre and in museums via performative objects, human material remains, anatomy models, and paintings, the ghosts of the operating theatre continue to haunt us. The artwork asks challenging questions about the body as an object. The final chapter is an examination of performances from 2015-2020 that re-staged the operating theatres. The epilogue closes with a discussion of other contemporary performances from 2020 that engaged with the anatomy theatre and the corona virus. The book argues that no/body is ever an object, even in death.

Her edited collection Contemporary Approaches to Adaptation in Theatre (2018) has seventeen case studies and explores a range of international adaptations in international Anglophone Drama.

Her book Automata and Mimesis on the Stage of Theatre History (Basingstoke: Palgrave, 2011) focuses upon automata or self-moving mechanical puppets and their influence upon theatre history and intellectual history from the Renaissance to the end of the First World War.

She is the co-editor of Palgrave's Adaptation in Theatre and Performance book series.

She is also a member of the AHRC Peer Review College.

Ghosting the Operating Theatres: Performing the Body as an Object (forthcoming 2022).

Co-Editor with Vicky Angelaki of the Book Series Adaptation in Theatre and Performance for Palgrave MacMillan.

“Karen Finley’s Shut Up and Love Me! A Hysteric/al Interrogation of the Incest Taboo,” The Routledge Reader on the Body in Performance, Ed Roberta Mock (London; Routledge: 2023).

Kara Reilly is an author, theatre historian, director, and dramaturg.

She is interested in intersections between science and technology in theatre and in cultural performance. She is also a dramaturg and a director and specialises in Adaptation Studies.

She is interested in intersectionality, dis/ability studies, gender/queer theory, and the decolonising the curriculum.

I'm currently writing and directing an adaptation of Aristophanes' tragicomedy Clouds called cloud 2020 incite. The piece is produced by incite theatre company. We will launch the first episode on 26 November 2020.

Aristophanes’ Clouds mainly discusses the separation between art and science in educational policies as well as in societies. Art, technê, stands in the play for political and rhetorical art, which Strepsiades and his son wish to conquer in order to deceive their creditors, while science, understood as exact knowledge of nature, is represented by Socrates and his Thinkery or The Knowledge Shop.

In our production race, class, gender, and dis/ability are at the heart of the play. We ask if race, class, gender, and dis/ability are all socially constructed, than can representation or mimesis show us the very process of social construction itself? We are also interrogating the mind/body divide, open access, and decolonising the curriculum. The play presents the question: What is the role of a university in a time of global pandemic and crisis?