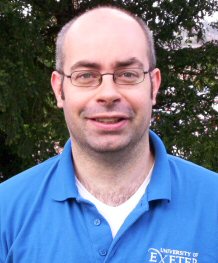 Jon has been with the Department since 1991 and is the Technical Manager with responsibility for the Digital Theatrecrafts module and the smooth running and scheduling of all practical and technical activities in the Department.

The Drama Department online timetabling and equipment and production management tool Chronos was written by him and is continually developed as students request more features.

He was trained by Maurice Marshal as assistant electrician at the Northcott Theatre and his interests include all aspects of technology in the wacky world of entertainment, particularly the technology of scenic automation in theatre and many aspects of cinema technology and special effects.

He has been Lighting Designer of many shows in and around Exeter and the odd one in London and further afield.

Jon is responsible for the following websites which are constantly evolving and increasing in size;

Jon's work as a Lighting Designer is listed below. 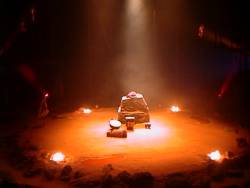 Jon is involved at a national level with his personal research project The Strand Archive (www.strandarchive.co.uk) which engages with equipment and practices of theatre lighting technicians since 1915.

Along with a group of colleagues from the international technical theatre industry he has launched The Backstage Heritage Collection (www.backstageheritage.org), a database of equipment of historical interest worldwide which is being gathered together and preserved and organised for exhibition.

From January 2015, he is a member of the Association of British Theatre Technicians Historical Research Committee, which meets monthly.

His resource website Theatrecrafts (www.theatrecrafts.com) has been used by educational institutions worldwide, and is continually developed.

Since 1991 the technical teaching in the Drama Department has evolved as the needs of the programme have changed.

The teaching and learning is backed up by an internationally-known technical theatre resource Theatrecrafts.com, where new resources are regularly posted.

The teaching is as broad as possible, to ensure all students are engaged, whatever their specific interest.