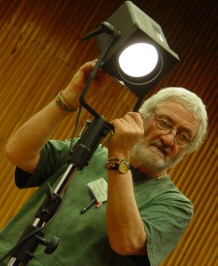 John Somers is a freelance theatre maker and writer and an honorary fellow in the Department of Drama at Exeter. He retired from the University in 2005 but works extensively abroad, especially in, Finland, Turkey, Greece, Poland and the Czech Republic. John specialises in Applied Drama which he characterises as ‘Drama which has a job to do’. He founded and taught the MA Applied Drama at Exeter and is the founding director (1995) of the Exeter Applied Drama Research Conference which last met in 2011.

In the UK and overseas John has developed, with students and with professional actors, a range of Interactive Theatre programmes on issues such as alcohol abuse, runaway children, bioethics, self harm, depression amongst farmers and stress and suicide in the veterinary profession. Much of this work has been developed in co-operation with specialists from other professions – psychiatrists, biologists, the police and staff at the Royal Veterinary College. He recently created and co-directed a film for the Vetlife website. In Finland he has worked with nurses and doctors in Vaasa Central Hospital to make a programme on medical ethics. He was commissioned by OXBOW and DAWN, two anti-bullying organisations, to make a programme on bullying in the workplace.

His award-winning Interactive Theatre programme ‘On the Edge’ toured nationally for nine months across the UK. The programme deals with the emergence of psychosis in a 17 year-old boy. Subsequently this programme was commissioned by Rethink as part of its ‘Time to Change’ anti-stigma mental health campaign.

John also makes original theatre in communities and has created and directed ten theatre projects in East Devon.  Always comprising original work, the productions are mounted in non-theatre spaces. The storyline of Foresight (2007) concerned the crash in 1943 of a German Junkers 88 bomber aircraft in the Tale Valley where John lives. It involved 135 people and was performed in a marquee in a field where one of the German crew fell to his death. A WWII aircraft flew over the audience at the end of the performance. Recent Community Theatre projects involve verbatim theatre and site specific theatre - more information at www.tvctheatre.org/

John writes for academic and research journals and also for more accessible (for the general public) publications. He is willing to discuss projects or issues to do with Applied Drama with people who are shaping their own work approaches.

John is the founder editor (1996) of the research Routledge journal ‘Research in Drama Education’, and winner of the American Alliance of Theatre in Higher Education Special Recognition Award.

The lifeblood of Higher Education drama enrolment is in the many Drama classes which happen in secondary schools.  The current Government’s curriculum plans pose a threat to Drama’s continued inclusion in the school curriculum with teachers already reporting how curriculum time is being reduced or Drama being eliminated completely.

This presentation aims to give teachers in schools and in HE a tool with which to make the case for Drama.  John gives his consent to users adapting the presentation to their specific context, only asking that use of the presentation and its affect and effect is communicated to him.  HE staff could use it to make the case for their discipline to their current students and consider asking those students to use it in a visit to the secondary schools they attended.

Research shows that visual imagery is effective in triggering memories in people who have memory loss issues.  This PowerPoint presentation seeks to use images from the youth and early maturity of those who have signs of dementia.  Its early slides draw on my own childhood and will make little sense to you or others.  Also, I spoke to each slide and also encouraged comments from those watching it.  I am happy to receive email enquiries and you are welcome to adapt it and use it.  If you do,  I would appreciate feedback.