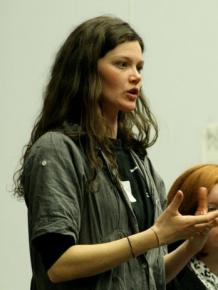 Erin serves as a Lecturer in Applied & Educational Theatre, and as the convenor of the MA Applied Theatre pathway. She is also Co-Director of Doorstep Arts in Torbay: a grassroots organisation providing sustainable long-term participatory arts engagement opportunities for children and young people in an area of statistically low socio-economic status. Doorstep Arts works in collaboration with Battersea Arts Centre and 8 regions across the UK as part of the Collaborative Touring Network (2013-2024), building connections between outstanding touring performance and ongoing participatory work at various doorstep sites across Torbay.  She also serves as the drama advisor for the MA in Creative Arts in Education, within the Graduate School of Education on the St Lukes campus.

Her 2013 PhD, titled Vital Spaces/Vital Signs: Young People, Performance, Identity and Dialogue, examined the ways in which devised theatre practice with young people aged 13-19 creates pedagogically rich space for dialogue about identity and social change. From 2013-2015, Erin worked on the AHRC-funded Amatueur Dramatics: Crafting Communities in TIme and Space as a postdoctoral research fellow. This research was led by Jane Milling (Exeter), Helen Nicholson (Royal Holloway) and Nadine Holdsworth (Warwick) and was the first major study to seriously consider the social and cultural dimensions of amateur dramatics. Erin serves as a board member for Theatre Alibi, and helped to host their Getting Through the Cracks symposium series in 2020-21.

She writes and publishes in open-access and public-friendly formats which aim to have a non-academic audience and readership, primarily using the Doorstep Arts blog as a primary space for reflection, sharing practice, and opening up dialogue about key areas of concern.

Erin's research is conducted through practice. Much of this work is led by Doorstep Arts in Torbay. This grassroots and community-based action research enriches the Applied Theatre courses by creating practical placements for university students.

As one of the members of staff working with the Applied Theatre pathway, she supports university students working out in the field with various school, health and community groups.  Current project placements include RD&E Hospital Children's Ward, Age UK, Magic Carpet, Bigfoot Arts SW, Libraries Unlimited, and the Pupil Referral Unit at the Stansfield Centre in Exeter.

Through Doorstep Arts, Erin administers and produces 14 ongoing weekly groups for children and young people aged 4-25 across Torbay.  These groups devise and create their own theatre, dance and music with support from professional artists.  Erin is also a regional producer for Battersea Arts Centre's Collaborative Touring Network - the CTN is aiming to reinvent touring theatre through work in nine areas of traditionally low arts-engagement across the UK.

Erin serves as the chair of the Torbay Arts in Schools Network (the regional Cultural Education Partnership) and also serves on the board of Theatre Alibi.

Erin regularly teaches on a variety of practice-based modules in the Drama Department, but her specialism is Applied and Educational Theatre. She convenes the two elective modules which focus on community-based socially engaged theatre practce: DRA2026 and DRA3012.

She also serves as the drama advisor for the MA in Creative Arts in Education on the St Lukes campus in the Graduate School of Education. Here, she teaches on MA courses EFPM224, EFPM228, and EFPM308.

A former secondary teacher in the USA, Erin's own MA in Teaching enriches her pedagogical approach, and she uses a student-centred and experiential model of teaching.