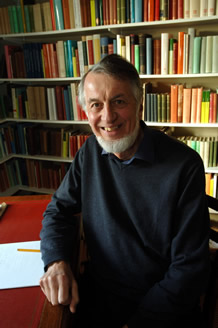 Old chaps in their eighties tend to pontificate, so here’s my contribution. In October 1976, on the train to Exeter for my job interview and thinking I’d better have something specific to offer, I roughed out a course to be called ‘Mythology and Historical Thought’, with the two modern categories treated as a unitary concept (since figures like Agamemnon and Romulus were thought of as historical). ‘Myth. and Hist.’ started off as a first- and second-year undergraduate module, was later converted into a third-year specialist option, and eventually became a free-standing MA course. The particular complex of issues it involved has been central to my work for the last half-century.

The point is that historical scholarship is all about epistemology: How can we know, now? How could they know, then? It has to be dependent on empirical enquiry – hypotheses tested against evidence and argument – as the only rational route to understanding, even to what might count as knowledge. You don’t have to structure your argument in such formal terms, but it does matter that you know that’s what you’re doing. What survives from the ancient past, whether text or artefact, is primary evidence; scholarship is finding it, identifying it and interpreting it on empirical principles.

It’s always tempting to begin with the secondary literature, previous scholarship that might save you the trouble of mastering the primary evidence for yourself. The trouble is that a generation brought up on postmodernism regards that as the proper thing to do; you begin by ‘situating yourself in the debate’, and the digital revolution has made it easy for you to regard primary evidence as just ‘data’ that can be accessed at will. With ‘the debate’ treated as an end in itself, serious argument about the validity of hypotheses is becoming unfashionable: issues are ‘explored’, questions are ‘problematised’. But everything is already problematic; I think the scholar’s job is to offer solutions, based on specific evidence and forensic argument. Refusing to accept that a particular view can be shown to be wrong seems to me to be querying the whole raison d’être of scholarship.

Long experience has taught me that respect for primary evidence can’t be taken for granted. In my own work I try to insist on what the ancient evidence says and present it as fully and directly as possible; if that evidence is incompatible with the common modern view, then the common modern view needs rethinking. But people are reluctant to change opinions they’ve always believed to be self-evidently true. The regular response to a challenge is to sit on the fence, carry on as before and hope it’ll go away.

If we ask ‘What are the humanities for?’, the answer might be ‘to provide a better understanding of other times, other places, other values, other minds’, and doing that – getting a better understanding – takes more than just ‘exploring’, ‘problematising’ and staying non-committal. Scholarship is a creative art, but it is also a disciplined one. It demands both the curiosity and imagination needed to formulate hypotheses and the clarity and precision needed to test them for credibility. Some hypotheses are demonstrably more credible than others. Refusing to make the test is a dereliction of duty. Here endeth the lesson…

I came to Exeter as Professor of Classics in 1977, was Head of Department until 1990, retired in 2001, and am now Emeritus Professor. I'm still a regular participant in the Department's research seminar, and am always happy to be consulted informally (email address above).

I’ve been fascinated by the ancient world ever since I was a boy. My first and abiding interest has been in the late Roman Republic, both its literature and its social and political history: see Catullan Questions (1969), New Men in the Roman Senate (1971), Cinna the Poet (1974), Catullus and his World (1985), Remembering the Roman People (2009), and Julius Caesar (2016). That led me into the study of Roman historiography, and from there to the myth-history of early Rome: see Clio’s Cosmetics (1979), Historiography and Imagination (1994), Remus: A Roman Myth (1995), Roman Drama and Roman History (1998), The Myths of Rome (2004, APA Goodwin Award of Merit), and Unwritten Rome (2008). The city of Rome has always been a major interest, ever since Anne and I spent the first year of our married life there in 1962-3. Anne too is a classicist, and taught Latin in the Department from 1992 to 2001; a long time ago we did a translation of Caesar’s Gallic War commentaries together (The Battle for Gaul, 1980), and thirty years later we did one of Ovid’s Fasti (Times and Reasons, 2011, World’s Classics paperback 2013).

Two recent books have been deliberately controversial. The Roman Audience (2015) was designed to counter the widely-held axiom that while Greek literature was part of a ‘face-to-face’ oral culture, Latin literature was aimed at an educated elite and transmitted only by written texts; I collected the evidence to show that the works of Greek and Roman authors alike were composed both for oral delivery to a public audience and for subsequent preservation in textual form. The House of Augustus (2019) attacked two dogmas: a historical one, that Augustus was the first Roman emperor (no, he was a popularis leader who freed the republic from a domineering oligarchy), and an archaeological one, that he lived in the palatial house on the Palatine that was excavated between 1958 and 1984 (no, Augustus’ modest house was on the site of the later Flavian palace, which is why the Flavian palace was called domus Augustana). The older I get, the more I’m astonished by the sheer inertia of scholarly orthodoxies – but see the ‘Research’ tab for all that!

Exeter has always had a strong ‘outreach’ tradition, and I’ve tried to contribute to it. Some of the talks and other occasional pieces that I’ve given over the years are collected in Talking to Virgil (1992), How Old is Exeter? (2016) and Exeter and the Ancient World (2020); you’ll find some departmental history there too.