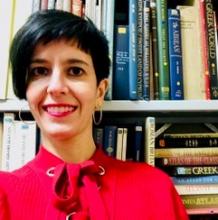 My area of expertise is ancient Greek history and epigraphy. My research explores Greek religion and magic as an object of cultural history. I have published on four main research themes: blood pollution, gender, emotion, knowledge and education. I apply socio-anthropological and psychological theories to evidence from material culture, inscriptions in particular. Thanks to the support of the Leventis Foundation, I can carry out the research project Divine Knowledge: Religion, Gender, Ethnicity, and Access to Power in the Hellenistic and Imperial Greek World.

Living and working in Italy, Germany, and the UK has had a profound impact on my mind-set and research methodology, and I try to combine different aspects of the scholarly traditions I got to know during my academic journey.

Promoting and advancing equality, diversity, and inclusion for all is at the core of my research, teaching, and way of life. I am a founding member and LGBT+ liaison officer of the Women’s Classical Committee UK (wcc-uk.blogs.sas.ac.uk).

I am Education Incubator Fellow 2020/21 leading the project Mindful Classics: Embedding Contemplative Pedagogy into the Study of Antiquity.

My publications have explored four interrelated themes in the field of Greek history:

Pollution, purification, and revenge. My research has reassessed the belief in blood pollution and rites of purification after homicide in the Greek world, highlighting the entangled relationship between ancient Greek law, religion, and emotion of social groups.

Gender. I further explored revenge mechanisms in other contributions, aiming another strand of my research at better understanding how women could exploit magic as a tool of social power and agency.

Emotion, mind, and body. I am interested in how religious settings could impact the emotional state of the ritual participants. I take into account the influence of anatomical, biological, neurobiological, and cognitive processes—both in pathological as in non-pathological conditions.

Knowledge and education. I am currently co-editing with Tanja S. Scheer (Göttingen) a collective volume on Greek religious education and ritual knowledge (Mohr Siebeck Press, forthcoming). My Leventis project at Exeter intends to elucidate how gender, ethnicity, and socio-economic inequality shaped the creation and transmission of Greek religious knowledge from the third century BCE to the second century CE.

Additional supervisor of Charlotte Spence (title of the PhD research project: Conceptions of the Dead and Divine in Curse Tablets and Binding Spells from Late Archaic Greece to the Fall of the Roman Empire in the West).

I first encountered Greek culture in my native Sicily. I pursued a BA/MA in Classics at the University of Pisa, and, at the same time, a Diploma of Excellence in Arts & Humanities at the Scuola Normale Superiore of Pisa. I gained my PhD in Ancient History from the Scuola Normale Superiore of Pisa (2011). I was Research Assistant within the ERC project ‘The Social and Cultural Construction of Emotions: The Greek Paradigm’ (Oxford). From 2013 to 2015, I held a Gerda Henkel Fellowship at the Royal Holloway, University of London. From September 2015 until August 2019, I was Postdoctoral Research Associate at the University of Goettingen, Collaborative Research Centre 1136 Education and Religion, funded by the German Research Council (DFG).

When I have the possibility, I go back to the Mediterranean since I am a sailor at heart.