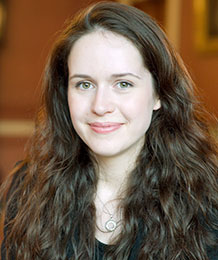 I am a Classicist and linguist working mainly on the languages of ancient Italy. My work uses approaches from historical sociolinguistics to investigate multilingualism, language contact and gender linguistics. I have previously taught modules in Greek, Latin and Indo-European linguistics, Roman history, Latin language and Latin literature.

My book Italy Before Rome: A Sourcebook (Routledge, 2021) developed out of a combination of my current research project and the module 'Italy Before Rome' (CLA1230/2230). This interdisciplinary sourcebook uses historical, epigraphic and archaeological sources to tell the story of Italy before Rome, collecting together texts in Latin, Greek, Oscan, Umbrian, Etruscan and other languages for the first time. Drawing on cutting-edge research, this book is an accessible introduction to the languages and peoples of Italy in the first millennium BCE.

My previous book, Oscan in Southern Italy and Sicily (Cambridge University Press, 2015), uses frameworks from epigraphy, archaeology and the sociolinguistics of language contact to explore the relationship between Greek and Oscan, two of the most widely spoken languages in the south of Italy.

My current research deals with language contact across ancient Italy, taking a comparative approach to language use in areas such as Campania, Lucania, the Veneto and the city of Rome. I am using sources in a wide range of languages - including Latin, Greek, Oscan, Venetic, Etruscan and Messapic - alongside material culture and archaeology to build a more nuanced picture of how languages and communities interacted. I have been awarded an AHRC Early Career Leadership Fellowship (2018-2021) entitled Connectivity and competition: multilingualism in Ancient Italy 800-200 BCE for the initial phases of this research.

You can find out more about my research and publications, and read my blog on my website.

My research interests include ancient Italy, linguistic and cultural contact in the ancient world, ancient migration, personal names, Greek and Roman comedy, and epigraphy. My work uses approaches from historical sociolinguistics to investigate language contact and gender linguistics; currently I especially enjoy using linguistics to place multilingualism and mobility in their historical context. I am also particularly interested in exploring different approaches to fragmentary sources and lesser-known ancient languages.

My current research project, Connectivity and competition: multilingualism in Ancient Italy 800-200 BCE, has been awarded an AHRC Early Career Leadership Fellowship (2018-2021). In this research, I take a comparative approach to language use in areas such as Campania, Lucania, the Veneto and the city of Rome. I am using sources in a wide range of languages - including Latin, Greek, Oscan, Venetic, Etruscan and Messapic - alongside material culture and archaeology to build a more nuanced picture of how languages and communities interacted. This research has previously been supported by a Rome Award at the British School at Rome (2015).

You can find out more about my current research on my website and blog.

I was an Affiliated Researcher at the AHRC-funded Greek in Italy project, which ran at the University of Cambridge from 2014 to 2018.

In the course of the first millennium BC Greek sailors, traders and colonists visited and settled in the Italian peninsula in increasing numbers. The southern half of Italy became known as ‘Big Greece’, both by Romans (Magna Graecia) and Greeks (Megalē Hellas). Greek settlements in Italy are attested from the 8th century BC onwards, and there is evidence for Greek trade from even earlier. Greeks brought with them urban living, religion and wine drinking, the alphabet and its associated uses. Some cities of Italy, including Naples, Rhegium and Tarentum, remained Greek speaking even under Roman rule.

Substantial archaeological and textual discoveries in the last three decades have opened up our knowledge of the Greeks in Italy and the native societies they encountered, but there has been no complete study of the impact made by Greek on indigenous languages – this project aimed to fill this gap. We considered the nature and outcomes of contact between Greeks and speakers of the various native languages of ancient Italy, investigating the changes on the languages themselves, and relating linguistic interactions to social and political factors.

I have published a number of articles relating to the languages of Italy with my project colleagues, Nicholas Zair, Livia Tagliapietra and James Clackson, including a new reading of the multilingual Petelia curse tablet and some new suggestions for understanding the fragmentary Roccagloriosa law.

The edited volume Migration and Mobility in and around the Ancient Mediterranean (Cambridge, 2020) was also a major outcome of this project.

You can find out more about the project at our blog or @GreekinItaly.

Centre for Connectivity in the Roman World

I am a member of the Centre for Connectivity in the Roman World at the University of Exeter.

This Centre aims to examine in what ways connectivity contributed to the shaping of distinctive cultures, economies and societies across the breadth of the Roman world and its immediate neighbours.

I am a member of the Votives Project research network, which brings together people from different backgrounds who study, create or use votive offerings or other related ways of communicating with the divine. It aims to facilitate dialogue between academic disciplines, and between academic and religious 'practitioners', and in doing so to develop rich cross-cultural and multi-period understandings of votive material and contexts.

Matteo Calabrese 'The languages of the South Picene group'

I have been involved with the Women in Classics network since its foundation in 2015. I have previously been its ECR liaison officer and managed its website and social media. You can find out more about our work at the WCC's website and blog, on Facebook, or @womeninclassics.

I was a trustee of the Society for the Promotion of Roman Studies (2017-2020), and I am currently a member of the Research Promotion and Facilitation Committee at the Institute of Classical Studies.

I am originally from Chelmsford in Essex. I studied Classics at Pembroke College, Cambridge (BA 2009), and  I continued at the University of Cambridge for my MPhil (2010) and PhD (2013), specialising in ancient linguistics. During 2012, I was also an Erasmus PhD Researcher at Ca' Foscari, Venezia.

In 2013, I joined Gonville and Caius College, Cambridge, as a Research Fellow. During my fellowship, I also worked as an Affiliated Researcher on the AHRC-funded Greek in Italy project, and received a Rome Award at the British School at Rome for my new project on language contact in ancient Italy.

My interests include film and theatre, and I have been involved with three of the Cambridge Greek Plays: twice as a member of the chorus (Agamemnon 2010; Prometheus/Frogs 2013) and once as a producer (Antigone/Lysistrata 2016).

I came to the University of Exeter as a Lecturer in Classics and Ancient History in September 2016.