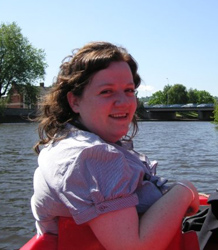 I first arrived in Exeter many years ago as an undergraduate student in French and Latin. In 2011, I completed a PhD in the Department of Classics and Ancient History under the supervision of Dr Rebecca Langlands. My doctoral thesis, entitled ‘The Aeneid and the Illusory Authoress: Truth, fiction and feminism in Hélisenne de Crenne’s Eneydes’, examined a female-authored translation of the Aeneid into French from 1542, bringing together my interests in Latin literature (especially Roman epic) and its reception in Early Modern France, translation studies, women writers, the representation of women and the history of the book.

I am now a Senior Lecturer in Classics and Ancient History, teaching predominantly language and literature courses. I aim to combine in my teaching a broad understanding of the literature of the ancient world, and what it tells us about culture and society more generally, with close textual examination and critical analysis. I teach a range of language courses and literature in translation, including Roman Love Elegy and Roman Laughter.

I am passionate about sharing my love of Classics and, as well as overseeing a programme of Latin clubs in local schools, I have recently taken on the role of Outreach Officer for the Classical Association.

In 1541, writing under the pseudonym Hélisenne de Crenne, the French noblewoman Marguerite Briet produced a translation of the first four books of Virgil’s Aeneid that remains largely unknown. As a female author, Hélisenne provides a sixteenth-century woman’s perspective on the Aeneid, an on classical literature more generally, and the uniqueness of her translation in this respect makes her work extremely significant.

My PhD thesis offered a thorough examination of Hélisenne’s translation not only with regard to her gender but also the social, historical and literary climate in which she writes, contributing to an understanding of the need for a holistic approach to Classical Reception Studies. Focussing on the mise en livre, as well as the text, my approach also stressed the need to reevaluate the relationship between the author and the text that we often assume is more direct than is actually the case. Through such an examination of her Eneydes, I argued that Hélisenne emerges as a serious participant in the humanist tradition who engages with classical literature in such a way as to question masculine textual authority, whilst deliberately implicating herself through her translation in a web of authorities who are not to be trusted.

Having recently completed the monograph based on the thesis, my next project project will take the form of a monograph on classical reception and gender in sixteenth century Europe more broadly, but again with a particular focus on female translators working on the margins of classical scholarship.

In 2014, I was elected to the standing committee of the Council of University Classical Departments and am currently Statistics Officer, meaning that I am responsible for collating and publishing staff and student data for instiutions in which Classical subjects are taught across the UK.

I aim to combine in my teaching a broad understanding of the literature of the ancient world, and what it tells us about culture and society more generally, with close textual examination and critical analysis. I teach a range of language courses and literature in translation, including Roman Love Elegy and Roman Laughter.

I am a Fellow of the Higher Education Academy and was delighted to have been awarded the prize for Best Lecturer at the Students' Guild Teaching Awards in 2015.

I am originally from Lincolnshire, but now call Exeter home. I love the landscape of the Southwest and when I’m not in my office, you are most likely to find me swimming in the sea.