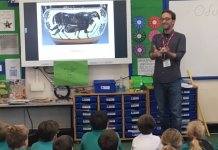 Children at a primary school in Exeter were transported back to the ancient world this week and learnt how to write the name of their school in ancient Greek, thanks to a visiting lecturer from the University of Exeter.

Dr Nicolo D’Alconzo captivated the year 4 children by explaining how modern super-heroes such as Batman, Spiderman and Wonderwoman had a surprising amount in common with ancient Greek heroes.

The University lecturer told them how in ancient Greece children also liked stories, some of which were written down by Homer, about superheroes. They included Odysseus, a hero who defeated a series of monsters, including the huge one-eyed Cyclops, and only escaped from the monster’s cave by clinging to the belly of a giant sheep.

Like Batman, Odysseus did not have super powers, but his ingenuity and intellect meant that he routinely triumphed over monsters and villains.

Dr D’Alconzo, also told the children the story of an antecedent of Spiderman called Arachne. She was a talented weaver of thread who was transformed into a spider.

The lecturer in ancient Greek literature is one of a number of members of the University of Exeter’s classics department to give talks in Exeter schools.

Dr Sharon Marshall, who lectures in Latin at the University, has been running a Latin teaching project in a number of Devon schools.

In February next year, in conjunction with a national initiative called Advocating Classics Education, the University of Exeter’s Classics department will hold a day-long event for local secondary schools at the University to introduce children and their teachers to the literature and history of the ancient world.

It will include a demonstration children can take part in on how to create a Greek phalanx with shields, interactive workshops on Roman drama, and a talk by the Guardian’s chief culture writer and celebrity classicist Charlotte Higgins.

Dr D’Alconzo addressed 90 year-four children who have been studying ancient Greece this term.

The academic told the 8 and 9 year olds about the Amazons – fierce female fighters – who had much in common with Wonderwoman.

Achilles was in many ways similar to Superman, the expert in ancient Greek stories explained. Achilles was invincible but had one weakness – his heel. His mother had dipped Achilles as a baby into the magical waters of the River Styx to make him invulnerable. However, she held him by his heel and it was left unprotected. Superman was just as brave and invulnerable as Achilles. But he had a weakness too. When exposed to Kryptonite he was weakened and transformed him into a quivering wreck.

Dr D’Alconzo said: “Deep down the ancient Greeks were very similar to us when it comes to passion for superheroes. I was impressed how much the children knew about the Greeks. They did most of the talking.”

The children at Stoke Hill junior school also heard how the Greek alphabet is similar to our own and that the word ‘alphabet’ is based on the first two letters of the Greek alphabet Alpha (a) and Beta (b). The Stoke Hill pupils learnt a word in ancient Greek used by Homer to describe Odysseus meaning multi-talented, or multi-skilled.