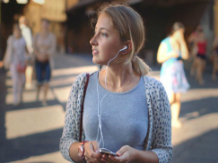 These apps have been created by the University of Exeter’s Humanities researchers in association with the REACT (Research and Enterprise in Arts and Creative Technology) Knowledge Exchange Hub which is funded by the AHRC (Arts and Humanities Research Council).

'The Exeter Manuscripts Project' seeks to introduce 7-16 year olds to the world of medieval manuscripts and material culture, which are fascinating yet invisible to the general public, and not part of the national curriculum. The Exeter Manuscripts Project created an iPad prototype app with Creative Economy partner Antenna International, offering an innovative functionality enabling users to translate 10th century Old English text to modern English by sliding a finger over the manuscript on screen. Supervised by Professor Emma Cayley, the ambition of this project is to develop a full app widely available to young people to explore medieval culture, literature, art and history.

In partnership with the Royal Albert Memorial Museum & Art Gallery (RAMM) and 1010 Media, 'Moor Stories: Reimagining the Dartmoor Landscape Project' allows those inspired by Dartmoor to share their stories, photographs and connections with the historic site. Led by Professor Gabriella Giannachi, the web app gives members of the public the chance to connect their experiences of Dartmoor with the artefacts kept in RAMM and offers a new platform for individuals to explore the origins of this important landscape.

Anka Djordjevic, Knowledge Exchange Manager of REACT said of these projects: 'It is very exciting to see the development of partnerships between research academics and creative industry. This kind of collaborative work and engagement can bring about all kinds of new knowledge and unexpected results. As one of the academics said, playing with people other than your friends is useful and potentially transformative. We have been lucky to be able to involve PhD researchers on some of these projects and that has made a huge difference. So we are seeing something that started as an initiative to enrich research and benefit economy, bring new experiences and possibilities to doctoral researchers.'

'Exeter Time Trial' is another app project principally investigated by Professor Gabriella Giannachi in partnership with RAMM, 1010 Media and Exeter City FC Supporters Trust, which started as a trail builder app to pave the way for those living in or visiting Exeter to discover its historic past interactively whilst walking through the city. It has since grown into 'Placeify', a locative web app that keeps developing new trails in and around Exeter, and more widely.

Similarly utilising maps and geo-location technology, ‘Hidden Florence’ is a project developed by Professor Fabrizio Nevola with Calvium in which researchers have created a fictional contemporary guide character to lead students and tourists through the streets of 15th Century Florence. The App – published by the University of Exeter and available on GooglePlay and AppStore – offers an immersive experience as the user navigates the city through the interface of a Renaissance map, and the wool-worker Giovanni provides an audio guide to unusual sites, that are triggered automatically by the location-aware background technology  which responds to the users’ movement around the city.

As one of four knowledge exchange hubs across the UK, acts to facilitate knowledge exchange, with the University of Exeter working in a collaborative partnership with the University of the West of England, Watershed and the Universities of Bath, Bristol and Cardiff. With a commitment to applied research and external engagement, REACT projects seek to reach new audiences whilst building academic partnerships and enhancing research capital.

To find out about more about these and other REACT projects, please visit their website.