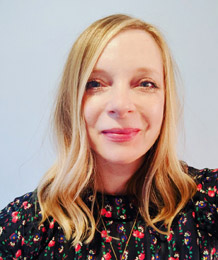 Felicity Gee is Senior Lecturer in Modernism and World Cinema. She has published on surrealists Leonora Carrington, Claude Cahun and Luis Buñuel, avant-garde film, Japanese cinema,, and affect. She is the author of the forthcoming monograph Magic Realism, World Cinema and the Avant-Garde (Routledge 2021), which examines the critical inception of magic realism in painting, photography and literature, and its practical application in film. Her research loves are modernism, surrealism, critical women's writing, and film-philosophy. She has taught at both undergraduate and post-graduate level in Japan and the U.K., and currently teaches courses on film theory, film-philsophy, surrealism, critical theory, film history, and East Asian cinema. Felicity is currently Programme Leader for Film Studies.

Felicity completed a BA (Hons) in English Literature with Associated American Studies and an MA in Film Studies at Southampton University before moving to Osaka, Japan. In Japan she taught film studies, English Literature and creative writing at two universities. While in Japan, she also instigated and ran a city-based film studies programme for adults, with the aim of widening accessibility to independent and art cinemas, and engaging a range of public audiences.