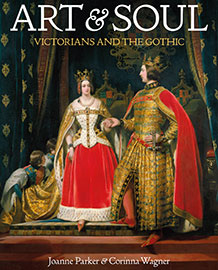 From the spires of Truro Cathedral, to the rose window of Exeter’s Royal Albert Memorial Museum (RAMM), the South West boasts some of the finest medieval-style architecture in Britain – yet these landmarks were built in the 19th century.

A new exhibition at the RAMM investigates how the Victorian mania for all things Gothic created some of the century’s most impressive architecture, art, and literature – and in the process transformed the West Country.

Two experts in Victorian literature and history at the University of Exeter have a new book ‘Art and Soul: Victorian and the Gothic’ which complements the RAMM exhibition. The book explores 19th century artists, writers, architects and designers who drew inspiration from the medieval period. This Gothic Revival helped shape British society leaving its legacy in politics, religion and the monarchy as well as art and design. The book uncovers how the movement forged local identity and a sense of community, whilst challenging modernity.

The South West has many fine examples of the passion for Gothic. Exeter Cathedral’s Gothic Revival restoration work and Truro Cathedral’s Victorian stained glass windows, reminiscent of the craftsmanship of William Morris, are the pinnacles of this movement. Castle Drogo illustrates the romantic fascination with castles that began in Gothic literature and developed through the work of Sir Walter Scott and other poets, whilst King Arthur’s Halls in Tintagel contains some of the best Pre-Raphaelite artwork. National Trust homes such as Tyntesfield, near Devon, and Tiverton’s Knightshayes were built by people who made their money in the booming 19th century. They hired the most famous architects, including William Burges, to design Gothic castles for a modern age.

Dr Corinna Wagner from the University of Exeter said:“The Gothic revival wasn’t simply about having big beautiful houses filled with gorgeous things. It was about figuring out how those finely crafted objects and those awe-inspiring buildings could make the everyday life of the average person better and happier. Gothic revivalists set about cleaning up neighbourhoods, reforming civic buildings and conserving churches. They believed that by making our surroundings in the pattern of medieval cloisters or Gothic castles we would feel pride, civic responsibility and attachment to one another. There was a belief that buildings, books and art will shape how we live our lives, this perspective changed the landscape of Britain, as well as the region.”

Dr Wagner added: “Some of the most outstanding examples of design commissioned in the South West are on show, including the extraordinary watercolours for Knightshayes by William Burges and an extravagant bronze throne from Tyntesfield made to designs by Viollet-le-Duc. High quality furnishings and fittings from Devon churches feature alongside the work of Harry Hems, an Exeter-based sculptor and wood carver whose distinctive brand of medievalist design may be seen across the region.”

The RAMM, where the exhibition Art & Soul is taking place until April 2015, is itself a manifestation of the Victorian love of the medieval past and the rage for neo-Gothic architecture designed by John Hayward and inspired by John Ruskin. The exhibition explores the most memorable Victorian works of art and architecture in an era when Britain was the most powerful nation in the modern world.

Dr Joanne Parker from the University of Exeter explains:“The exhibition is a fantastic opportunity to see works by some of the greatest 19th century artists and designers collected together, here in the South West. There are items on loan from the Tate, the Victoria and Albert Museum, the Ashmolean Museum in Oxford, the Royal Collection, and many other museums and historic properties around Britain."

She added: “It’s a chance to actually get close to iconic paintings like Waterhouse’s ‘Lady of Shalott’ and wonderful Arts and Crafts masterpieces like William Morris’s tapestries. The Morris and Co. tapestry of the Knights of the Round Table that crowns the exhibition is absolutely vast. It’s rarely on public display, and this is the first time it’s ever been to the West Country."

There are numerous events connected to the exhibition at RAMM over the coming months including a panel debate on Wednesday 3 December discussing how Gothic styles of buildings like the Houses of Parliament and also the ordered symmetry of classical, Georgian styles shaped today’s townscapes.

On Saturday 6 December a creative writing workshop will draft poems inspired by the exhibition. On Wednesday, 10 December, there will be an evening of haunting poetry readings, by ten published writers. Whilst mince pies and Christmas drinks are consumed, the writers will recite selections of Gothic poetry from the newly published Gothic Evolutions anthology (edited by Dr Wagner).