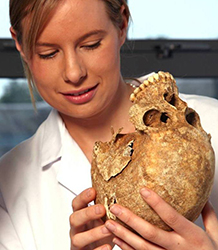 My research has two main strands. The first focuses on the analysis of archaeological human remains, identifying diseases present in the skeletal remains and exploring the broader social, cultural and environmental context of those diseases. This work has resulted in a co-authored book, 'Life and Death in Medieval Gaelic Ireland: The Skeletons from Ballyhanna, Co. Donegal', and an edited book, 'The Science of a Lost Medieval Gaelic Graveyard: The Ballyhanna Research Project'. I have a particular interest in the archaeology of medieval and post-medieval Ireland.

The second strand of research focuses on applied bioarchaeology, using information from human skeletal remains in new interdisciplinary collaborations. This work includes the Wellcome Trust funded project, 'Care, the great human tradition: A multi-disciplinary collaborative exploration of family care across time and culture'. The aims of this project were to (1) bring scholars from archaeology, anthropology, and history together with contemporary care researchers, family carers, and partner organisations, to develop the Collaboration for Applied Archaeological, Anthropological, and Historical Research and Engagement (CARE) Network and, (2) to undertake scoping research for a future grant application.

A second example of this work, is the AHRC-funded project, 'Literary Archaeology: Exploring the Lived Environment of the Slave', a collaboration between archaeological and literary scholars, working with creative writers from the writing group 'Our Stories Make Waves'. In this project contemporary writers re-imagined the lives of enslaved individuals using archaeological evidence from human skeletal remains. The research culminated in a public debate about slavery, and reading of new works (including poems and short stories) at the Georgian House Bristol. Research outputs included the co-authored journal article 'Handle with Care: Literature, Archaeology, Slavery' (published in Interdisciplinary Science Reviews) and an edited collection, 'Writing Remains: New Intersections of Archaeology and Literature' (in press with Bloomsbury).

Dragos Mitrofan: Hybridisation and inequality in Late Antiquity. A meta-analysis of the lime, gypsum and chalk deposits in Roman burial contexts

Belinda Tibbetts: Foetal and Infant Skeletal Palaeopathology as an Indicator of Maternal Health and Population Stress

Sarah Cuthbert: Enriching the Neolithic: The Forgotten People of the Barrows (AHRC funded)

Mandy Kingdom: The Past People of Exeter: Health, Social Standing and Well-being in the Middle-Ages and Early Modern Period (AHRC funded)