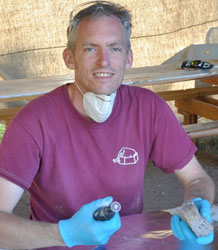 Dr Alex Pryor is a Palaeolithic archaeologist with a specialism in isotope analysis who joined the University of Exeter in September 2017. Dr Pryor’s research focuses on reconstructing past mobility and subsistence practices that enabled our Palaeolithic hunter-gatherer ancestors to thrive in seasonally changing environments around the globe, but especially in cold northern climates. Topics of particular interest include the reconstruction of diet, climatic context to occupations, and the mobility patterns of humans and their prey. Dr Pryor also has additional specialisms in the study of charred plant remains (particularly related to evidence for plant foods), and the application of dental cementum thin section analysis to reconstruct age and season of death of prey.

My research employs isotope analysis (C, N, S, O, Sr), charcoal analysis and dental thin-section analysis to reconstruct past mobility of humans and animals, palaeodiet and palaeoclimatic context, with a particular focus on subsistence-related activities (food and the firewood economy). My main area of interest is the European Upper Palaeolithic, but I also work in more recent contexts applying the same set of research methods.

The expansion out of Africa of our Homo sapiens ancestors around 70,000-50,000 years ago led to rapid colonisation of northern latitudes across Eurasia. I am interested in reconstructing how our hunter-gatherer ancestors adapted to the harsh and strongly seasonal environments which they encountered, including aspects of subsistence, colonisation and range expansion/contraction, and questioning how groups accessed the diverse range of resources needed to live a hunter-gatherer existence. Specific topics of interest include:

Details for specific research projects are listed below.

This project is focused around a 24,000 year old circular feature made of woolly mammoth bones discovered recently at the site of Kostenki 11, Russia. About 16 such sites with circular mammoth bone features are known from the Ukraine/Russian Plain region and the structures are usually interpreted as Upper Palaeolithic dwellings, where bone has been used partly as a substitute for wooden building materials and partly for ritual reasons. However, many of the known examples were discovered a long time ago and we have little direct archaeological evidence for how these visually impressive sites were actually used. This research seeks to provide this direct evidence for Kostenki 11 by studying minute and microscopic remains recovered from around the bones, including microlithic debitage, charcoal, phytoliths, faecal spherulites, and sediment micromorphology. The first results from this project (Pryor et al. 2020) received international media attention and helped shape the direction of the next phase of research which is now underway, funded by National Geographic.

This project is funded by a NERC GW4+ doctoral grant, and the primary research is being undertaken by my PhD student Wouter Bonhof. Woolly mammoth bones and teeth are found widely at archaeological sites across Eurasia, sometimes in very large quantities including instances of more than 100 individual mammoth at a single site. Evidence from a variety of sources indicates that at least some (perhaps most) of these bones came from active hunting and killing of mammoth. Assessing the importance of mammoth to Palaeolithic diets and man-mammoth dynamics more generally requires knowledge of mammoth mobility; could hunters have targeted predictable seasonal migration routes that reliably produced huge quantities of food at specific times of the year, or were mammoth movements less predictable, requiring encounter-based approaches to hunting that are inherently less certain and more risky as a source of food? This research seeks to answer this question by reconstructing the seasonal mobility patterns of mammoth preyed upon by Gravettian humans. Our primary case study site is Yana RHS, made famous as one of the earliest examples of human occupation in the Arctic Circle and for the abundant art discovered there (e.g. Pitulko et al. 2012).

Alex is collaborating in this five-year international project (2016-2021) funded by the Polish National Science Centre and led by Dr Jarosław Wilczyński of the Institute of Systematics and Evolution of Animals in Kraków, Poland. By the Late Gravettian (approx. 24,000-20,000 years ago) the Pavlovian technocultural complex that had persisted in Central Europe for several thousand years vanished as this social system apparently collapsed, probably due at least in part to the increasingly severe climates associated with the last ice age. Lithic evidence from central Europe suggests a fragmentation of groups into discrete sub-cultures with minimal interaction between them. However another possibility is that hunters adapted to the harsher climates by diversifying their activities seasonally, making different tools in each season of the year while engaging in long-distance travel between regions seasonally to hunt different animals at different times of the year.

This project seeks to test this hypothesis – that in the Late Gravettian period central European hunter-gatherers practiced seasonally diverse subsistence strategies involving long distance mobility between regions. Working alongside a team of other researchers, Alex is using isotopic analysis to investigate the seasonal mobility of hunters and their prey, focusing on woolly mammoth, horse and reindeer. Excavations at five target case study sites began in the summer of 2017, focusing on a different site for each year of the project: Kraków Spadzistsa (Poland), Trencianske Bohuslavice (Slovakia), Lubná (Czech Republic), Bodrogkeresztur (Hungary), and Jaksice II (Poland).

Other project members include:

Firewood and other fuels in the Palaeolithic

I am also interested in researching firewood harvesting and distribution in different environments. Firewood is a critical but often-overlooked economic resource offering a novel route into modelling hunter-gatherer mobility within a landscape, based upon the need to meet firewood demands within reasonable geographic distances from a basecamp. In fact, firewood supply is often a more important consideration than food for hunter-gatherers when choosing settlement location and duration of occupation (Pryor et al. 2016).

An additional element within this research uses experimental archaeology to investigate fuel needs for different tasks and in different situations.

The Palaeolithic origins of food storage

Before joining Exeter Alex worked as a post-doctoral researcher for three years at the University of Southampton on a Leverhulme Funded project searching for evidence of food storage technology in the European Upper Palaeolithic. Food storage is postulated as an important adaptation developed by our hunter-gatherer (Homo sapiens) ancestors in response to the pressures of the last ice age, between 50,000-20,000 years ago. However, this theory relies on ambiguous archaeological evidence that is inherently problematic to interpret. Focusing on key archaeological case study assemblages at Dolní Vĕstonice-Pavlov (Czech Republic) and Kostenki 11 (Russian Federation), our goal was to search for food storage behaviours by demonstrating substantive human occupation of a campsite during a season of the year when none of the major prey species was actively being hunted and killed.

Our method engaged in an intensive reconstruction of seasonal prey availability and seasonal hunting activities at the case study sites involving 1) the reconstruction of prey seasonal mobility using oxygen and strontium isotope analysis of faunal remains; 2) identifying the seasonality of hunting activities using dental cementum analysis; and 3) investigating firewood gathering practices based on the charred remains of the fuel consumed. While the formal data gathering part of the project has now ended, the analytical and publication phase is expected to continue for another few years.

Tales from Trauma: Life and Violence in the Roman Colonia of Gloucester?

The Tales from Trauma project (with Laura Evis from Exeter, and Pontus Skoglund and Tom Booth from the Francis Crick Institute) is investigating origins and mobility of the mid 3rd to late 4th century population of the Roman colonia of Gloucester, using the latest bioarchaeological methods. Funded by a grant from the Roman Society, it will focus on individuals recovered from a large cemetery discovered along Barton Street, one of several large cemeteries used in Gloucester during the Roman period. Preliminary assessments of this cemetery population by Cotswold Archaeology and the University of Exeter have identified a significant level of trauma, around 13% higher than the average for Romano-British cemeteries. This anomalous result, along with the presence of intriguing artefacts, such as a continental cross bow brooch, suggests that the cemetery was used to inter a particular sector of Gloucester’s Roman society that experienced unusually violent lives. Here, we seek to deploy an array of methods to tell the individual stories behind these traumas and investigate the biogeographic origins of the Barton Street cemetery population: forensic bioprofiling (including assessments of trauma and cause/manner of death), isotopic assessments (diet and migration), and aDNA analysis (biogeographic origin, interrelatedness, and infectious pathogens present). The analytical work is scheduled to take c.8 months, with planned outputs occurring in 2022 including academic publications, public presentations and a museum exhibit.

My research involves international collaborations with teams of researchers from across Europe and the wider world, inclduing particularly colleagues from the Institute for Systematics and Evolution of Animals in Kraków (Poland), the Palaeotlihic and Paleoethnology Research Centre in Dolní Vĕstonice (Czech Republic), The Moravian Museum in Brno (Czech Republic), the Institute for History of Material Culture, Russian Academy of Sciences in St Petersburg (Russian Federation) and the State Archaeological Museum-Reserve in Kostenki (Russian Federation), among others.

I am also collaborating with Prof. Alan Outram of the University of Exeter reconstructing the mobility patterns of horses in some of the earliest pastoralist societies of Central Asia.

Other recent collaborations have included work with Prof. Tim Insoll of the University of Exeter doing some isotopic investigations as part of his Becoming Mulsim project (Pryor et al. 2020).

I am open to discussing research proposals in the following areas:

Alex is currently first supervisor to the following PhD students:

Kostenki village is located approximately 500km south of Moscow on the River Don. The area is famous for the large number of Palaeolithic sites discovered in the immediate vicinity of the village, all dating to the Upper Palaeolithic period between approximately 50,000-18,000 years ago. Many of these sites show evidence for multiple levels of occupation, meaning over 50 individual Palaeolithic occupation deposits are known within an area of a few square kilometres.

One of these sites, Kostenki 11, is known for the spectacular examples of circular mammoth bone structures discovered there, usually interpreted as the remains of large Palaeolithic houses. In 2014 survey work revealed a new, previously undiscovered circular structure made of mammoth bone ‘dwelling’ complete with pits around the outer edge. Excavation work started later that year. Working in collaboration with the Kostenki museum director Sasha Dudin and other local partners, Alex visited the excavations in 2015 and 2017 to collect samples for isotopic analysis of the woolly mammoth remains, and to underake a program of sediment sampling (phytoliths) and flotation for the recovery of charred plant remains from the site. These samples are contributing towards Alex’s research into both Palaeolithic food storage, and more broadly to understanding the role of the woolly mammoth in Palaeolithic subsistence strategies. A final phase of excavation and sample collection is planned as part of Alex's on-going research (funded by National Geographic).

As part of the Late Gravettian project an international team that included 16 Exeter undergraduate students spent four weeks in summer 2019 excavating at the site of Bodrogkeresztúr, Hungary. The aims for the season were to generate new materials from secure stratigraphic contexts that could be targeted for a suite of scientific analyses in accordance with the aims of the project. This was a single-season excavation with a different case study site being targeted for re-excavation in each of the five years of the project. A video made by the undergraduates about the field season is viewable on facebook here.

Alex was awarded his undergraduate degree in Archaeology and Anthropology by the University of Cambridge in 2006. He remained at Cambridge for his MPhil and PhD, awarded in 2011 for research investigating the impact of the Dansgaard-Oeschger climatic cycles on Upper Palaeolithic hunter-gatherers of central and eastern Europe (supervised by Tamsin O’Connell). He then worked in Cambridge as a research assistant on various projects before moving to the University of Southampton in 2014 as a post-doctoral researcher investigating the origins of food storage technology in the European Upper Palaeolithic (led by Clive Gamble and Alistair Pike). Alex joined the University of Exeter as Lecturer in Prehistoric Archaeology in September 2017.