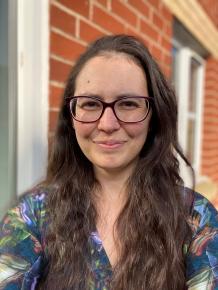 Carly is an archaeological scientist specialising in zooarchaeology and a founding member of the HumAnE Research Centre where she directs the Morphometrics Lab. Her research focuses on the use of Geometric Morphometrics (GMM) to distinguish between the faunal remains of closely related animals and identify domesticates in archaeological contexts. She is primarily interested in how changes in animal morphology are related to changing husbandry practices and the unique cultural roles of animals in the past.

Increasingly, her research focuses around themes of human-animal interactions and the influence of these relationships on human societies both today and in the past. She specalises in a GMM, but promotes a full-suite analytical methodology (combining studies of osteology, metrics, pathology, genetics and isotopes) to the analysis of wild and domestic animals, and humans remains. Increasingly her research aligns with the UN's Sustainable Development Goals (SDGs), and her work is focussed on providing a deep-time perspective to some of the largest issues facing humans, animals and our shared environment today.

Carly holds degrees in both archaeological science and anthropology and she completed her PhD at the University of Liverpool in 2018 as part of the NERC funded “Deciphering Dog Domestication” project. Her thesis focused on the analysis of morphometric variability in prehistoric New World dogs, and investigated how changes in canid morphology can reflect changes in the cultural, technological and economic use of dogs in the Americas. After a year as PDRA on the AHRC 'Exploring the Easter E.g.' project, she is currently a Postdoctoral Research Fellow working on the AHRC project 'Warhorse: The Archaeology of a Military Revolution'.

Carly is the Project Officer and a Postdoctoral Research Fellow on the "Warhorse" project, which is a collaborative AHRC funded research project, lead by Professors Oliver Creighton and Alan Outram.

Carly’s work focuses on the zooarchaeological analysis of equid remains from key archaeological sites across Britian to provide a deeper-time perspective on the impact of this Medieval icon on both the broader cultural landscape of the Middle Ages, as well as on the biology of the horse itself. Her research combines traditional zooarchaeological methods with geometric morphometrics and stable isotope analysis to reconstruct changing human-equid relationships.

She is also involved in a series of long-running research colloborations, examining the relationships between humans some of our closest domestic animals, namely dogs and rabbits. More broadly, she is interested in the emergence of distinctive breeds of these, and other, domestic mammals, and in the continuation of morphological and biological divesity exhibited after their initial domestication. Her work on the long term relationship between humans and domestic animals naturally includes an examination of these animals' wild counterparts, and Carly's work is increasingly exploring the localised extinction of wild animals, such as the wolf and the wild boar, and contextualising these historical extinctions in the framework of modern rewilding policy.

"From Feed the Birds to Do Not Feed the Animals" PI Prof. Naomi Sykes (Wellcome Trust)

I am open to discussing research proposals on any relevant subject within my research expertise. I am especially happy to consider working with candidates with interests in the following areas:

Current and Past Graduate Students