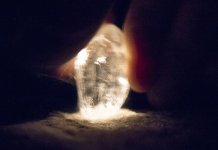 Image shows the piezoelectric properties of a piece of quartz and its ability to generate an electric charge, as a toolmaker hits it

A growth in the use of crystal quartz to make tools thousands of years ago shows the sophistication of ancient communities, according to new research.

The mineral was chosen because of its powerful symbolism, even though it involved painstaking work and other materials that would have been easier to use were available to prehistoric toolmakers, archaeologists argue.

Archaeologists have found there was a sudden spike in the number of tiny hand-made tools of less than 1cm made of crystal quartz in southern Africa around 14,000 years ago.

People could have used chert, which was more durable and found locally, but they may have chosen crystal quartz because it has several unique properties including as a source of light when it is struck and as a source of sharp cutting edges. Communities may have engaged with crystal quartz because they saw material as “alive” and believed they were able to harness the power from the mineral to see into the future.

The technique of constructing tiny crystal quartz tools would have taken specific sets of skills to master. Crystal quartz was also used in other parts of the world for tools at this time, when other raw materials were available. Crystal quartz is brittle and can fracture, but can give an exceptionally sharp and precise cutting edge.

“We show that although crystal quartz was never the dominant raw material for tool production at either Sehonghong or Ntloana Tsoana, the mineral does show increased frequencies after 14,000 years ago,” says first author Justin Pargeter, from Emory University. “This pattern is shared between the two sites, separated by 100 kilometers and in very different environments, which suggests that widely dispersed hunter-gatherer groups were connected and engaged with one another.”

Dr Jamie Hampson, from the University of Exeter, who is co-author of the paper, said: “Quartz is abundant in the region, but from a functional point of view it is not the best material for making small tools. It takes more energy and time to use this material. If it flakes well, it can provide an extremely sharp cutting tool. But most of the time it just shatters.

“We found stone tools became smaller and smaller, there was a spike in their use, and increasingly they were made of crystal quartz instead of chert, which would have been a more readily available rock. We can’t say for sure why crystal quartz was used, but it may have been chosen for its unique symbolic qualities. This shows communities were more sophisticated and thoughtful than they were previously given credit for.”

Evidence from ethnographic texts and also from rock paintings suggests ancient communities at the time – in this region and elsewhere around the world - entered a hallucinogenic state. The luminescence caused by the sparks when crystal quartz was hit may have been part of their rituals performed in order to enter an altered state of consciousness and access the spirit world.

Dr Hampson has been examining evidence from cave paintings and engravings for 20 years, showing how they depict and embody these rituals. In some places people put pieces of quartz into gaps and cracks in the rock faces, seen by many indigenous communities as the barrier between their world and the spiritual world.