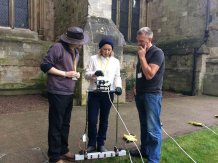 A team of archaeologists are carrying out the first geophysical survey of the Cathedral Green.

The first full-scale archaeological survey of Exeter’s Cathedral Green is taking place as experts try to find out what secrets still lie beneath the ground in the ancient area.

Experts are using sensors in an effort to try and map lost roads and buildings as well as features in the landscape such as pits and ditches in part of the city known to be home to a Roman bathhouse and basilica, as well as a medieval cemetery.

The geophysical survey of 2,000 years of history will allow archaeologists from the University of Exeter to produce a detailed map of the features underneath the Green without disturbing any delicate remains still in the ground.

Archaeological digs took place in the Cathedral Green from the Victorian era onward. These excavations allowed experts to know more about Roman life in Exeter, but there could be many more clues about ancient Exeter still underground.

A team of archaeologists from the University of Exeter are now carrying out the first geophysical survey of the area. They are using a resistivity meter to get more information about structures likely to be underground. Probes are inserted into the ground to measure resistance. Different types of features have different levels of resistance – a buried wall has a higher resistance than a water-filled ditch.

Professor Oliver Creighton, who is leading the work, said: “This technology will hopefully allow us to see what lies beneath. We know this area is packed with buildings and bodies, and we aim to produce a map that will allow us to produce an accurate picture of what remains of some of these features. It’s possible we could find things which haven’t been seen before”.

“We will map the whole grassed space in the Cathedral Green. We know what the area means different things to different people even now, and it has been a place of constant change, and our map will allow us to celebrate this incredible history.

“The beauty of using this machine is that, unlike excavation, it leaves no traces. It is not destructive or intrusive.”

The survey began in May, and the archaeologists will carry out further work if they find new features in the area.

University of Exeter students will help Professor Creighton with the work, which has been permitted by the Dean and Chapter of Exeter Cathedral and Historic England.