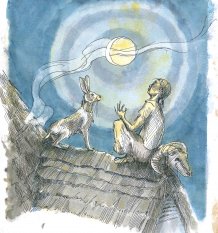 Communities in Britain have worshipped different goddesses associated with hares for thousands of years, a study by a team of experts working to trace the mysterious origins of Easter traditions shows.

The fertility and violence associated with the animal led it to become entwined with religious and social customs.

In the Iron Age people worshipped Andraste, in the Roman period, a hybrid goddess Diana-Andraste, in medieval England, Ēostre and in medieval Wales St Melangell. All were associated with the hare but their origins are diverse.

Researchers working on a University of Exeter-led project to trace how Easter customs began, how the hare and rabbit came to be linked with the festival, and the animals and festival were imported to Britain, believe the goddesses were created and worshipped as a way for people to express concerns about violence. The team also worked with the BBC, the author Adrian C. Bott, and the visual artist Ben Frimet to produce a video, and an online art installation exploring these ideas.

There have been goddesses associated with the hare in Britain for 2,000 years, but they had very different roles in different periods. Some were imported from other countries, and were adapted by people in the UK to suit the society, landscape and animals around them. Links between the hare and Easter only started in modern Britain.

Andraste was associated with warfare, with her worshippers battling against the Roman Empire. Roman Britain was peaceful, so violence was then associated with hunting, with people looking to Diana-Andraste for protection and wearing her hare symbol on plate brooches. In Wales people worshipped St Melangell in the hope she could help them solve disputes about land use local people and distant authorities. Today, people share memes depicting an alleged pagan goddess called ‘Easter’ in online debates about the origins of our modern festival.

The experts looked at images of the goddesses in churches and other places to see how they were used by people at the time. They also used archaeological evidence from animal bones found throughout the country.

Dr Carly Ameen, a member of the research team, said: “Analysing ancient symbols alongside animal bones helps us understand more about society at the time, and can help explain some of the Easter traditions we follow today. Using physical evidence and art from the past shows us about people’s beliefs.

Dr Luke John Murphy, lead author of the study, said “Animals are more than sources of calories and raw materials. Humans have always used religion to negotiate their direct relationships with animals, and we can learn more about ecology and society at the time through tracing those relationships.”

“In Britain today it’s almost as if we have invented a new goddess, ‘Easter’, because of gaps in our knowledge about where our traditions stem from. Archaeology and cultural research is increasingly showing how much of what we view as “British” today is a result of animals and ideas being imported into the country at different periods.”

Contrary to common assumptions, the Anglo-Saxon goddess Ēostre was not associated with spring, fertility, hares or Easter, researchers on the project say. Even her existence in pre-Christian England is controversial. Bede, writing in 725 AD, claimed the ‘English’ name for the month when Easter occurred was Eosturmonath, apparently a name derived from the pre-Christian spring festival dedicated to the goddess. But he may have exaggerated or even invented Ēostre. Dr Phil Shaw, another research on the ‘Easter E.g.’ project, believes it is possible Ēostre was associated with a local religious tradition in Kent, where she may have been a protective deity for a sub-tribal social unit called the Ēastorwara. Ēostre-worship and the Ēastorwara may have been based in an area around the modern village of Eastry – one of three English place names that share an etymological root with her name.

The association between the hare, Easter, and Easter eggs was first recorded in seventeenth-century Germany, but that hares and eggs may separately have been part of British Easter traditions for longer. The ‘Easter Hare’’s relationship with the early twentieth-century Osterfuchs (Easter Fox) recorded in north-western German folklore and the seemingly Victorian Easter Bunny in Britain are unclear, but the team are planning further investigations.

The research is funded by the Arts and Humanities Research Council.