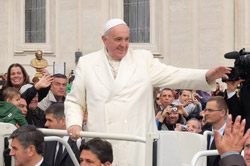 As noted under Contemporary Christian Views, Catholic understanding of the relationship between humanity and the rest of creation, and how it relates to environmental concern, has often begun from the statement in Genesis that human beings were created in God’s image.1 However, a development across time may be noted in the manner in which this relationship is articulated. Pope Francis’s encyclical Laudato Si’, published in 2015, is a particularly important recent statement.

1. Imago Dei and the responsibility humans are given for the earth

Gaudium et spes (1965), focussing on ‘the world of men’ (§2), and with obvious reference to Gen.1.26-8, notes that ‘Sacred Scripture teaches that man was created "to the image of God," …and was appointed by Him as master of all earthly creatures that he might subdue them and use them to God's glory' (§12).2

It is also made clear that this mastery was to be exercised according to the nature of God’s rule and dominion: ‘man, created to God's image, received a mandate to subject to himself the earth and all it contains, and to govern the world with justice and holiness’ (§34).

Although the roots of the concept of stewardship may be seen here, the term itself does not appear in this document.

In ‘Communion and Stewardship’, sub-titled ‘Human Persons Created in the Image of God’ (2002), the International Theological Commission3 presents Stewardship as one of the two main themes emerging from the theology of the image of God. They speak of desiring ‘to reaffirm the truth that human persons are created in the image of God in order to enjoy personal communion with the Father, Son and Holy Spirit and with one another in them, and in order to exercise, in God's name, responsible stewardship of the created world’ (§4).

‘Communion and Stewardship’ (§58 ) refers to the dominion discussed in §34 of Gaudium et spes, (see above), but then introduces the term ‘steward’ with reference to Jesus’ parables concerning masters and stewards (see Section 5 of the ‘Origins’ page).

The idea that human rule should be subject to, and of the same nature as, God’s rule is reiterated:

Human stewardship of the created world is precisely a stewardship exercised by way of participation in the divine rule and is always subject to it. Human beings exercise this stewardship by gaining scientific understanding of the universe, by caring responsibly for the natural world (including animals and the environment), and by guarding their own biological integrity.(§61)

It is notable that stewardship language is far less prominent in Laudato Si’ (2015).4 Sub-titled ‘On Care for Our Common Home’ Pope Francis clearly addresses here the whole world community and not just the Catholic Church (§3). As noted in Contemporary Christian Views, he does mention ‘responsible stewardship’ (§116) but this is one of only two occurrences of the terms steward and stewardship. A sense of human responsibility, under God, to care for the created world clearly remains, but Francis presents it within a framework of inter-relationships5:

The creation accounts in the book of Genesis … suggest that human life is grounded in three fundamental and closely intertwined relationships: with God, with our neighbour and with the earth itself. According to the Bible, these three vital relationships have been broken, both outwardly and within us. This rupture is sin. The harmony between the Creator, humanity and creation as a whole was disrupted by our presuming to take the place of God and refusing to acknowledge our creaturely limitations. This in turn distorted our mandate to “have dominion” over the earth (cf. Gen 1:28), to “till it and keep it” (Gen 2:15). As a result, the originally harmonious relationship between human beings and nature became conflictual (cf. Gen 3:17-19). (§66)

Furthermore, rather than the possibly hierarchical, managerial implication of the stewardship model (see ‘Criticisms’ page), Francis stresses the mutuality of the relationship between humans and the non-human world:

‘Each community can take from the bounty of the earth whatever it needs for subsistence, but it also has the duty to protect the earth and to ensure its fruitfulness for coming generations’.(§67)

2. The relationship between God and the whole of Creation

Catholic teaching, in common with other Christian churches, stresses that God is creator of all that is in existence, and affirms that creation is ‘very good’ (Genesis 1.31). In Laudato Si’ Pope Francis stresses the intrinsic value of all living things to God and the need for us to find out more about them. Speaking of ecosystems, he comments that:

We take these systems into account not only to determine how best to use them, but also because they have an intrinsic value independent of their usefulness. Each organism, as a creature of God, is good and admirable in itself; the same is true of the harmonious ensemble of organisms existing in a defined space and functioning as a system.(§140)

He also stresses that although that Christians do not view Creation as divine in itself (§90) 6, contemplation of nature can reveal something of God (§84-88); indeed, ‘The entire material universe speaks of God’s love, his boundless affection for us. Soil, water, mountains: everything is, as it were, a caress of God’ (§84). God is present in all things through the Spirit (§88) and there is a ‘universal communion’ between all living creatures (§89-92).

3. The intimate link between care for creation and the plight of the poor

In §25 of Laudato Si’ Pope Francis notes the fact that climate change affects the poor of the world more than others. Later in his discussion of what is happening to the earth (§49), he argues that ‘a true ecological approach always becomes a social approach; it must integrate questions of justice in debates on the environment, so as to hear both the cry of the earth and the cry of the poor’ (emphasis original).

He presents a clear connection, based in Christian theology, between care for creation and the provision of care and justice for the poor: ‘God created the world for everyone. Hence every ecological approach needs to incorporate a social perspective which takes into account the fundamental rights of the poor and the underprivileged’ (§93). He also appeals to the principle of the common good (§156-8), which, in the presence of injustice, becomes ‘a summons to solidarity and a preferential option for the poorest of our brothers and sisters’ (§158).

Imago Dei is ‘image of God’ in Latin. This idea is explored in ‘Communion and Stewardship: Human Persons Created in the Image of God', International Theological Commission. 2002
2 Pope Paul VI Gaudium et spes 1965

3 The International Theological Commission is composed of theologians who advise the Pope and those responsible for examining important doctrinal issues.
4 Pope Francis, Laudato Si’, 2015, (Vatican City: Holy See). The title is taken from the canticle of St Francis ‘Praise be to you’, which (echoing and developing Psalm 148) speaks of all living things as sharing a common kinship and joining together in praise of God.
5 Rather than major on the concept of stewardship, Pope Francis also opens his encyclical with reference to earlier Popes’ pronouncements linking ecology to other spheres of human relationship, including social and economic issues (§4-6).
6 In §78 he notes that ‘Judaeo-Christian thought demythologized nature’. Compare the arguments of Lynn White, discussed in ‘Is Christianity to Blame?’.