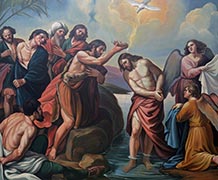 Depiction of Christ's baptism  in the River Jordan - image via:Shutterstock

Easter baptism with BBC's Songs of Praise and Exeter theologian

As part of the Easter special on BBC ONE’s religious television programme Songs of Praise, a University of Exeter theologian will be exploring the practice of early Christian baptism and its symbolism of death and resurrection. Professor Morwenna Ludlow explains the importance of flowing water, its association with Jesus who was baptised in the River Jordan and how modern baptisms remain closely linked with historic Christian traditions.

A baby was recently baptised in a village duck pond near Weymouth, by Revd Tim West who has conducted several other Christian baptisms in this way. The duck pond is fed by the aptly named River Jordan which flows through the village of Sutton Poyntz, Dorset. The baptism was filmed by the BBC and though baptising in this setting may seem like a curious thing to do in modern day Britain it follows a long standing early Christian practice according to Professor Ludlow.

She said:“Free flowing fresh water is known as ‘living water’ and streams and rivers were considered by the ancient Greeks and Romans to be associated with the divine.  But then, just as now, water also symbolised danger – even death. The recent duck pond baptism by Revd Tim West is going back to an early Christian tradition, reminding people of Christ’s baptism and drawing them closer to sharing Christ’s death and resurrection through having ‘living water’ poured over them.”

Professor Ludlow added:“Baptisms have always been designed to fit local circumstances and this is reflected in modern baptisms.  In one very early text it clearly states that if you don’t have living water, then use still and if not cool water then use warm.  Scholars now know that baptisms were more varied than we once thought. Communities didn’t just replicate what was happening in Rome, for example. Instead, priests made baptisms meaningful to local people. This adaptation to local custom still goes on. For example, some Exeter churches regularly baptise new members in the sea at Exmouth.”

During the filming for the Songs of Praise Professor Ludlow was interviewed in Revd Tim West’s parish in St Andrew’s Church sitting in a pew with a font behind her. Professor Ludlow observed that that early Christian fonts were often built in the shape of a cross. This was significant because a new Christian would walk down one arm of the cross into the water, would be baptised and then would rise up out of the water. This journey down into and up out of the water symbolised their sharing in Christ’s death and resurrection. We still see this tradition in modern font design: a few years ago, Salisbury Cathedral commissioned a beautiful cross-shaped font, with streams of living water flowing out of each arm into the floor below.

Songs of Praise will be broadcast on Easter Sunday (5 April) at 16:55hrs on BBC ONE.