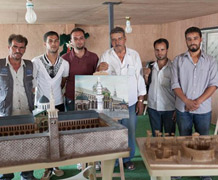 Powerful art and artefacts from Syria and the chance to hear from a doctor detained by the Assad regime are part of a series of events at the University of Exeter, celebrating the humanity which exists in the war-torn country.

The Syrian Civil War has caused devastation and led to millions leaving their homes. The events will show that, as well as horror, there is hope in the country.

The exhibition will run from 19 to 24 November in the Forum at the University of Exeter and is part of the Being Human festival of the humanities.

Objects on display include the original paper chess pieces made and played by western hostages in Raqqa, a piece of powerful contemporary Syrian protest graffiti by Syrian artists Ibrahim Fakhri and Zaher Omareen originally commissioned by the Victoria and Albert Museum and a large model of the Great Mosque of Damascus made by artists in Jordan’s Za’atari refugee camp. Also included are six iconic posters from the Syrian revolution of 2011 and accompanying text by Syrian writer Robin Yassin-Kassab.

Continuing the theme of Syria in the Festival, Dr Bashar Farahat, an Aleppo-trained paediatrician, who was granted asylum in the UK in 2015 after twice being detained by the Assad regime will speak at the University on the evening of 22 November. After escaping to Lebanon in 2013, Bashar worked with Syrian children in refugee camps. He now has a job as a teaching assistant in London, writes poetry and works with Syrian refugees in the UK and does what he can to support small camps in Lebanon.

There will also be a showing of A Tale of Two Syrias, a documentary by the award-winning film maker Yasmin Fedda, showing life in Syria through the eyes of a monk and an Iraqi asylum seeker in the months before the outbreak of the Syrian conflict.

These events have been organised by a team including Professor Emma Loosley, Associate Professor of Theology at University of Exeter and the charity Making Light.

Professor Loosley said: “I feel it is important for more people to understand what’s happening in Syria, particularly the violence and persecution faced by families every day.”