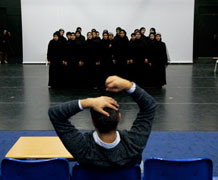 Queens of Syria is being screened at the University of Exeter on Thursday 12 November.

A powerful and heart-warming film about a group of Syrian refugee women is being shown at the University of Exeter.

A free screening of Yasmin Fedda’s award-winning documentary ‘Queens of Syria’, is being hosted by the University of Exeter’s Institute of Arab and Islamic Studies and Department of Theology on Thursday 12 November, and is open for everyone to attend.

The film follows a 2013 theatre project run with Syrian women who are living in exile as they prepare to perform the ancient Greek tragedy, ‘The Trojan Woman’; a play that although separated by two thousand years, mirrors the suffering, uprooting and bereavement of these modern day women.

‘Queens of Syria’ aims to celebrate the documentation of these women sharing their harrowing experiences of war and communicating to the world what has happened to them.

Emma Loosley, Professor of Religion and Theology at the University of Exeter said: “Myself and Director Yasmin Fedda, met over 10 years ago through mutual Syrian friends and we have both spent a significant amount of time living and working in the country. We have friends, and in Yasmin’s case relatives, experiencing the Syrian conflict right now, so this film highlights a very personal issue for both of us. We’re delighted to bring the film to Exeter to offer a unique insight into the humanitarian crisis.

“Showing this film is an amazing opportunity for the University to help bring this crisis to the attention of our local communities, colleagues and students, through the viewpoint of Syrian women who are describing their stories for the first time. First-hand accounts of personal experiences from women caught up in this conflict are rare in the media and often their plight is faceless to the world. I would encourage everyone to come along and view this remarkable film.”

The documentary follows women like Maha who narrowly escaped her home town, navigating shelling and snipers to get to the hospital to give birth. A year after leaving Syria, she found herself in the Trojan Women rehearsals by day, returning to the single tin-roofed room she shared with her husband and children at night. In parallel experiences to the characters in the play, each of the women in the play has suffered unthinkable loss.

Yasmin Fedda is an award-winning documentary film maker and has won multiple awards including the Black Pearl Award at the Abu Dhabi film festival, and a BAFTA nomination.

The screening will be held in the Peter Chalk Centre, Streatham Campus, 6.15pm. Refreshments will be available and there will be an opportunity to donate to SAWA for Development and Aid.