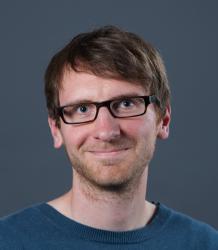 Current roles:
Senior Lecturer (Education & Scholarship) in German
Language Coordinator for German and Russian in the Foreign Language Centre
Employability Officer for the Department of Modern Languages and Cultures

Overview:
I teach German language to undergraduate students of German in all years, with a focus on ab initio and oral language teaching, and convene the modules MLG1052 and MLG2052. In addition, I am involved in the university's Foreign Language Centre as Language Coordinator for German and Russian.

I am the Exeter contact for the European University Tandem (EUniTa) project and if you're interested in finding a tandem partner for online language exchanges, please sign up at www.eunita.org
Being affiliated with the German Academic Exchange Service (DAAD), I am also happy to advise on funding opportunities to study in Germany and conduct the online language test OnSet for DAAD applicants.

I am External Examiner for IWLP German at Durham University and a certified UNILANG assessor, demonstrating my familiarity with the Common European Framework of Reference for Languages.

My research and scholarly interests currently include:

- Residence abroad as a linguistic and cultural learning experience


I regularly attend and present at conferences and workshops on innovations in language teaching as well as language policy and have been involved in the following conferences:

June 2019: Poster presented (together with Sonia Cunico) at Education Conference, University of Exeter.

January 2019: Paper given (together with Sonia Cunico) at the AULC 'Linguistic transitions: towards languages for life' Conference at King's College London on 'The EU-Funded EUniTa Project: A European Language Tandem for all Students'.

November 2018: Invited paper given (together with Sonia Cunico) at the Graduate School of Education, University of Exeter, as part of the Language and Education Network on 'Using technology to foster autonomous and intercultural learning in authentic language tandem encounters - The European University Tandem (EUniTa) Project'

June 2018: Paper given at InnoConf2018 at the University of Liverpool (together with Anke Bohm and Veronika Koeper-Saul) on ‘The European University Tandem Project – An integrated online platform to foster intercultural language exchanges across Europe (and beyond)’

May 2018: Paper given (together with Anke Bohm) at the annual German Academic Exchange Service summer seminar at Cumberland Lodge, Windsor Great Park, on new developments of the European University Tandem (EUniTa) Project.

June 2016: Paper given at the 3rd Colloquium on Innovation in Modern Languages Education at the University of Bristol: "From Interpreting to Powerpoint Karaoke: Diversifying the Advanced Oral Language Syllabus to Engage and Motivate Learners (and Teachers)"

June 2015: Roundtable contribution (together with Ulrike Zitzlsperger, Hugh Landsman and Gerard Owen) at the Second Colloquium on Innovation in Modern Languages Education at the University of Exeter on 'Fostering Language Learning on the Year Abroad: An E‐Learning Project Designed by Students for Students'

June 2015: Paper given at English & Multilingualism in 21st Century Europe Conference at Maynooth University on 'English-Medium Instruction in German Higher Education in the Context of Internationalisation and Language Policy – Challenges, Chances and Controversies'

January 2015: Paper given (together with María Lafuente) at the LLAS E-Learning Symposium at the University of Southampton on 'Using Moodle Quizzes for Technology-Enhanced Language Learning and Assessment'

June 2014: Paper given and acted as panel chair at the First Colloquium on Innovation in Modern Languages Education at the University of Bath

May 2014: Paper given at conference at the University of Leeds on 'Innovative Language Teaching at University: Enhancing student performance'

June 2013: Poster presented at conference at the University of Manchester on 'Innovative Language Teaching and Learning at University: Enhancing the Learning Experience through Student Engagement'

December 2010: Coorganised the annual meeting for DAAD-Lektoren and Sprachassistenten in the UK and Ireland at Cumberland Lodge, Windsor Great Park.

January 2010: Paper given at the induction seminar for new DAAD-Lektoren and Sprachassistenten in the UK and Ireland at Cumberland Lodge, Windsor Great Park.

From October 2015 to March 2018 I was the Exeter lead for the EU-funded 'European University Tandem (EUniTa) project, an international collaboration with six other universities (Barcelona-Blanquerna, Frankfurt, Florence, Liverpool, Paris-Sorbonne, Poitiers): www.eunita.org

I teach German language for Modern Languages and Cultures undergraduate students across all years and contribute to the cultural module MLG1020. I am module convenor for MLG1052 and MLG2052, personal academic tutor and marker for the year abroad modules.

I joined the Department in 2007/08 as a DAAD-Sprachassistent and subsequently was the DAAD-Lektor from 2008/09 to 2012/13. I am currently Lecturer (Education & Scholarship) in German and Language Coordinator for German in the Foreign Language Centre. I am a Fellow of the Higher Education Academy and hold a University of Exeter ASPIRE Fellowship.

Originally, I am from south-west Germany where I studied English, Film Studies and Foreign-Language Adult Education at the University of Trier, Germany, with a study abroad period at the University of Stirling. Being interested in (and a firm believer of) international exchanges, I attended summer schools in Nancy, Tallinn and Vienna, did a work placement in Ontario, Canada, and was a guest teacher in the English language summer camp of Tsinghua University in Beijing in 2012. I also organised DAAD-funded study trips to Germany and organised cultural events, such as panel discussions and film screenings on a range of cultural topics.