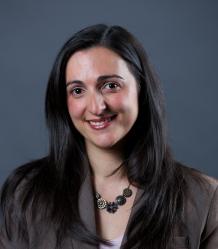 I teach a variety of oral and grammar classes at all levels:

I joined the department of Modern Languages in September 2012.

Prior to coming to Exeter I worked at the University of Hull as Lector in Italian where I also gained an MA in Translation Studies with TESOL.

I graduated at the Scuola Superiore di Lingue Moderne per Interpreti e Traduttori (SSLMIT) of Trieste, in Italy where I studied English, French and Slovene; I specialised in liaison, consecutive and simultaneous interpreting as well as in translation.

During my MA I developed my interest in film subtitling and in particular the subtitling of English humour.

In December 2014 I completed the PCAP course through Aspire and became Fellow of the Higher Education Academy.