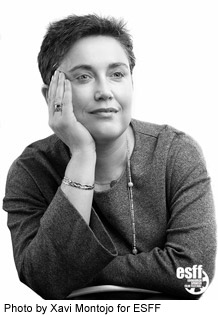 Professor Capdevila-Argüelles has published extensively in the fields of Gender Studies and Hispanism on both sides of the Atlantic. Her first book Challenging Gender and Genre in the Literary Text (UPS 2002) was published in USA.  Her books, Autoras inciertas (2008), He de tener libertad (2010) (http://www.laopiniondemalaga.es/cultura-espectaculos/2011/06/08/isabel-oyarzabal-mujer-ejemplar/428424.html)  and Artistas y precursoras (2013) (http://www.m-arteyculturavisual.com/2014/01/12/las-roesset-esas-perfectas-desconocidas/) have all won awards from the Spanish Ministry of Education (Dirección General del Libro y Bibliotecas).

Professor Capdevila-Argüelles joined in 2014 the network of experts producing the series Colección Obra Fundamental, with the prestigious Fundación Banco de Santander. This is a series of critical editions of materials coming from private archives, published in paper and digital format with analyses by important writers and critics such as Juan Manuel de Prada, Domingo Ródenas, Jordi Gracia and Ana Rodríguez Fischer. Together with María Jesús Fraga she has completed a critical anthology on Elena Fortun and Matilde Ras, El camino es nuestro,  (Fundación Banco de Santander, Colección Obra Fundamental, 2015) http://fundacionbancosantander.com/publicaciones_ficha.cfm?idArticulo=1967.  An e-book version of this best-selling anthology can be purchased at https://www.fundacionbancosantander.com/es/el-camino-es-nuestro. Click her to learn more about El camino es nuestro, https://www.youtube.com/watch?v=bLzez3sbu3M. Her second work with them, De corazón y alma,  an edition of the much awaited letters between Carmen Laforet and Elena Fortún prepared with Carmen and Silvia Cerezales Laforet, came out in January 2017.

Professor Capdevila-Argüelles also co-directs the collection Biblioteca Elena Fortún,  Editorial Renacimiento, http://www.editorialrenacimiento.com/. She has recently completed the critical introductions for Celia madrecita, Celia institutriz, two of the most important titles of Fortún's famous Celia series. She is also the author of the extensive critical edition of Fortun's unpublished novel Oculto sendero. For more information on this revival of Spain's most famous children's author, see http://www.elcultural.com/revista/letras/Oculto-sendero/38817, http://edaddeplata.org/edaddeplata/Actividades/actos/acto.jsp?rsection=Actividades&acto=6458

She has supervised doctoral and postdoctoral research in the areas of modern and contemporary Hispanic Studies, Feminism and Gender Studies. She is a Senior Fellow of the Higher Education Academy.

Read about my latest work on the much loved children's author Elena Fortún here: http://blogs.exeter.ac.uk/humanities/2015/10/

Research Specialisms
I welcome enquiries about postgraduate supervision (MRes, MPhil, PhD) in all areas of nineteenth and twentieth-century Spanish literature, especially autobiography, feminism and the avant-garde.

My main fields of research within the burgeoning area of Hispanic feminism are representations of generic and sexual ambiguity in literature and art and the relationship between woman and nation. I am also interested in the exploration of equality and difference in society and culture and, finally, in female literary and artistic authorship in modern and contemporary Spain.
Female-authored Autobiographical Writing
I am interested in the many forms autobiography written by women has taken in the twentieth century and beyond: from memoirs of the Spanish Civil War written by women to psychological poetry and narrative that explores the construction of the female ‘I'. Portrait-painting and feminist theory are two other areas I explore in the context of my investigation of autobiography created by women.
Avant-garde Literature and Art
My interest focuses on the work of avant-garde female authors and artists in Spain. Their names, mostly obliterated by time, constitute the most European exponents of Iberian culture. Examples of them are the ultraist poet and anarcho-feminist Lucía Sánchez Saornil and avant-garde sculptress and illustrator Marga Gil Roësset.
Gender Studies
I am becoming more interested and involved in contemporary gender analysis and in gender mainstreaming, a global strategy to achieve equality between the sexes and to eradicate violence against women in all its manifestations and in all aspects of contemporary life. I am particularly interested in the presence of violence and/or discrimination against women in the media, in the workplace, in policy-making and in culture and society.

Professor Capdevila-Argüelles has written the extensive critical introduction of  the anthology ‘Elena Fortún y Matilde Ras: El camino es nuestro’  and selected the texts with her collaborator MJ Fraga (U Complutense, Madrid). This 425-page volume, published in the much acclaimed Obra Fundamental Collection (http://fundacionbancosantander.com/publicaciones_listado.cfm?idCategoria=24), Fundación Banco de Santander,   reveals Fortún and Ras’s intellectual contribution as major 20th century avant-garde writers,  female intellectuals active during the Spanish Second Republic, Civil War and Franco’s dictatorship whose literature, journalism and feminist thought were largely forgotten on becoming political exiles after the Spanish Civil War. Elena Fortún continued writing the adventures of the famous Celia and Matilde Ras continued writing on graphology for the Spanish and French press but Francoism put an abrupt end to the project of modernity and emancipation they represented, a project rescued in this volume. The volume can be purchased in e-book format here> https://www.fundacionbancosantander.com/es/el-camino-es-nuestro

After a well attended press conference at the Fundación Banco de Santander (http://www.todoliteratura.es/noticia/8007/RECOMENDADOS/Fundacion-Banco-Santander-rescata-a-dos-escritoras-pioneras:-Elena-Fortun-y-Matilde-Ras.html) , the official book launch took place on the 21st January at the Instituto Cervantes, Madrid, with Prof. Capdevila-Argüelles and Dr Fraga joined by leading novelists Almudena Grandes and Maxim Huerta and by Borja Baselga, principal of the Fundación, https://www.youtube.com/watch?v=bLzez3sbu3M. Another book launch event took place in October 2015 at the Spanish Embassy in London, http://www.spainculturescience.co.uk/events/book-launch-%E2%80%9Cel-camino-es-nuestro%E2%80%9D-nuria-capdevilla.