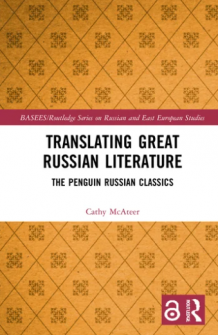 New research reveals for the first time the personal efforts and innovations behind major efforts in the 20th century to publish classic Russian literature in accessible and affordable English translations.

From 1950, Penguin brought great works by golden-age Russian writers to general readers in Britain and beyond. The legacy of this work still influences Russian translators – and reading tastes – today.

Dr Cathy McAteer, from the University of Exeter, is the first scholar to analyse the people and processes behind the Penguin Russian Classics series. She has researched the individuals involved, their agendas and working habits, as well as decisions made by Penguin staff about which texts to translate and publish.

Following the turn-of-the-century efforts of Constance Garnett and William Heinemann, Penguin came to be regarded as the de facto post-war provider of Russian literature in modern English translation.

Dr McAteer’s close analysis of archived correspondence between translators and editors, found in the Penguin archive at the University of Bristol and in individual collections at the Leeds Russian archive, has revealed the personal motivations and achievements of these figures. The research also shows the challenges they struggled with while working in isolation, including translator’s block, depression, bereavement, health and financial difficulties. The letters also show the autonomy Penguin gave them over their working methods.

Dr McAteer, whose research is published in a freely downloadable new book Translating Great Russian Literature: The Penguin Russian Classics, said: “This series played a hugely significant role in how Russian literature was produced and marketed in English, and its influence can still be seen.

“The Penguin Classics series editor E.V. Rieu wanted to produce “great writers’ works in good modern English”; translators made a concerted effort, therefore, to help readers cope with tricky Russian names and culture-specific objects, and to bring texts to life by lending characters different voices. The success of these translations paved the way for people’s interest in the Soviet literature from the mid-1960s.

“I hope this book shows the legacy of everything Penguin achieved. I wanted to remind people of the importance of translators, and to show the huge amount of work which had to happen – has to happen – to bring these classic books to an Anglophone audience, not just in the UK, but in the US, Australia, India, Pakistan, South Africa, and Canada too.”

Most of the Penguin Russian classics have since been retranslated in ways which acknowledge the achievements, but depart from the style, of those working in the 1950s, sometimes to restore the text’s original, stylistic features, to refresh the language, or to take into account the changing needs and preferences of a modern audience.

Dr McAteer’s research unexpectedly revealed letters and previously unpublished papers on translation theory by Penguin’s notable Dostoevsky translator, David Magarshack. Her book explains how Magarshack wanted those in his profession to recognise their own worth. Not shy of asserting himself, Magarshack urged literary translators to promote themselves, to demand both financial and reputational recognition. Dr McAteer’s research also identified an unsung heroine behind Magarshack’s success: his wife Elsie, who loyally proofread and corrected his work. She continued to promote her husband’s translations and to campaign for a blue plaque in his honour long after Magarshack’s death in 1977.

Dr McAteer, who interviewed Mr Magarshack’s daughter during her research, said: “David Magarshack should be celebrated for contributing to our modern appreciation of translators, key practitioners who are often overlooked. Magarshack was a man of complexity, of competing and conflicting personal influences, but also a man of intense self-belief. This blend of attributes did not always make it easy for him to follow prescriptive rules and formulae in practice but his legacy – both literary and professional – merits our recognition.”

Translating Great Russian Literature: The Penguin Russian Classics is published by Routledge. The research was funded by the ERC’s Horizon 2020, RusTrans project (Grant Agreement No.: 802437) and the Open Access team at the University of Exeter.