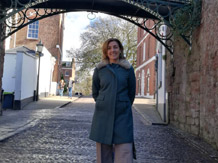 From Exeter to Boston

Marta Mateo, Professor of English and Translation Studies at the University of Oviedo (Spain),  who spent this year as a researcher and guest of ML and CTC in Exeter has been appointed as Director of the Observatory of the Spanish Language and Hispanic Cultures in the United States.

The Department of Modern Languages and the Centre for Translating Cultures say good-bye to Marta Mateo, Professor of English and Translation Studies at the University of Oviedo (Spain). Professor Mateo spent this year as a researcher and guest of ML and CTC in Exeter, funded by a research grant from the Spanish government and the University of Oviedo. She has worked on translations of English musical texts into Spanish. Professor Mateo explains:

“My research stay at the College of Humanities of the University of Exeter (from 1 February to 1 December 2018) has mostly been devoted to my work on the translation of vocal music – looking at the different translation modalities required for the various musical genres and the textual difficulties each text-type and translation mode entail, while illustrating it all with the analysis of English musical texts and their translations into Spanish. English vocal music is particularly fruitful to show the key role that translation has played in the journeys musical texts have made across linguistic, cultural and artistic boundaries through history, in the light of the enormous contribution of British and American cultures to ‘universal’ vocal music, and the ease with which countries like Spain have incorporated it. I have carried out a macro- and micro-textual analysis of the translation strategies adopted for a selection of English musical texts from various genres (opera, stage and film musicals, and songs of various styles), considering reception, sociocultural, historical, artistic and economic issues – and focusing on the Spanish context, in order to observe how the strategies reflect the linguistic/artistic/technical factors and constraints which determine the translation process of vocal music.”

Professor Mateo is now moving on to a new post in the USA. She has been appointed as Director of the Observatory of the Spanish Language and Hispanic Cultures in the United States (http://cervantesobservatorio.fas.harvard.edu/en), a research centre run jointly by Spain’s Instituto Cervantes and Harvard University, and located at the Faculty of Arts and Sciences in Cambridge (MA.). The centre is a forum for research and exchange among experts from Harvard University and other universities from the USA, Spain and other Spanish-speaking countries. Its main aim is to reflect on and discuss about the presence of the Spanish language in the United States, approaching the subject from a wide range of topics, covering four main areas of study: the Spanish language in the USA; linguistic minorities and cultures in contact; the teaching of Spanish; and culture and thought in Spanish. Professor Mateo bids Exeter a warm farewell: “I would like to thank most warmly the College of Humanities of the University of Exeter for hosting my research stay, as well as the Spanish Ministry of Education and the University of Oviedo for financing it, and all the wonderful colleagues I have met here for making me so welcome.”

Richard Mansell, her mentor in Exeter, has fond memories of her stay here: “Prof. Mateo has spent two consecutive periods with us as a visiting scholar through 2018; the first was part of her prestigious Salvador de Madariaga award from the Spanish Ministry of Education and Culture, and the second funded by her own institution, the University of Oviedo. Marta has played a very active role in the life of the department, generously responding to requests for teaching on the MA in Translation Studies, and offering two excellent seminars as part of the Centre for Translating Cultures seminar series. She has also been immensely generous in terms of her time and expertise, meeting informally with many members of the department (including early-career researchers and prospective PhD students); personally I will cherish our many moments talking about our research and our discipline, the integrity of which she both defends and promotes. I am not at all surprised that she is moving on to a prestigious and well-deserved role at the research centre hosted jointly by Harvard University and the Instituto Cervantes, and I warmly wish her every success.”