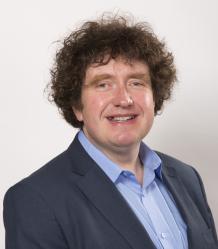 Garry Tregidga was appointed Assistant Director of the Institute of Cornish Studies in October 1997 and lives in his native mid-Cornwall. His research interests include oral history, cultural memory and the political history of Cornwall since the 1880s. Publications include The Liberal Party in South West Britain since 1918: Political Decline, Dormancy and Rebirth (2000), and Killerton, Camborne and Westminster: The Political Correspondence of Sir Francis and Lady Acland, 1910-29 (2006). He is currently working on a major study of the Celtic Revival and popular culture in Cornwall before the First World War.

In 1998 he founded the Cornish History Network, a research forum based at the Institute. Two years later his growing interest in the potential of oral history and cultural memory led to the creation of the Cornish Audio Visual Archive for the study and documentation of the region’s oral and visual culture. In 2002 he was awarded £172,000 from the Heritage Lottery Fund and other funding sources for Cornish Braids, a two-year fieldwork programme at the Institute that created a multigenerational profile of Cornish life. Additional grants of over £200,000 from funding bodies like HLF and the European Social Fund have subsequently been obtained in order to extend the archive. He recently established Cornish Story (www.cornishstory.com) that seeks to disseminate the collections of the archive via an Internet platform and a related series of conferences and publications.

The Cornish Audio-Visual Archive (CAVA) is a unique collection of recordings relating to Cornwall’s past and present. It seeks to harness the multimedia power of oral history, music, film and photography to find new ways of interpreting the story of Cornwall in the past and present. Subjects covered include agriculture, brass bands, geographical communities, identity, kinship, mining, politics and religion. CAVA emerged out of the pioneering work of the Cornish Oral History Forum in the late 1990s and the Cornish Film and Video Archive a decade earlier. The archive is keen to encourage wider participation in the research and recording process through a long-term programme of cultural and educational initiatives.

Based at the Institute of Cornish Studies and led by Dr Garry Tregidga, the Institute’s Assistant Director, the CAVA initiative is being developed in partnership with resource providers like the Cornwall Centre and Cornwall Record Office. CAVA is also keen to develop wider links with cultural, educational and archival institutions in other parts of the world, particularly in the Celtic nations and Diaspora communities overseas.

The outreach and educational work of the archive is delivered through the Cornish Story programme. This includes a multimedia resource site (www.cornishistory.com) with some of the recordings collected by the archive in recent years, an annual programme of lectures and conferences and a quarterly magazine entitled Cornish Story that is available in print form from the Institute of Cornish Studies.

Cornish Audio Visual Archive and Cornish Story can be contacted on: 01326 381 888 or cava@exeter.ac.uk

He is currently developing the Cornish Story programme based at the Institute of Cornish Studies with the aim of creating an online journal and an associated series of research groups, seminars and lectures. A collaborative project is also being pursued in association with researchers at the universities of Western Brittany and Rennes to compare and contrast the historical and contemporary experiences of Brittany and Cornwall. He is also currently focusing on the parliamentary constituency of North Cornwall since the 1880s as a case study of change and continuity in rural British politics.

2002: £172,000 from the Heritage Lottery Fund for the Cornish Audio Visual Archive (CAVA) programme

2006: £49,000 from the European Social Fund and matched funding sources for an oral history study of the Tamar Valley

2007: £45,600 from the Heritage Lottery Fund for the Narratives of the Family Oral History project

2008: £172,850 from the AHRC as co-applicant with Professor Marion Gibson of the Department of English for the ‘Mysticism, Myth and “Celtic” Nationalism’ project

2012: £1000 from the Celtic Research Trust for a Breton-Cornish comparative project

2012: £40,230 with Sarah Chapman from the Heritage Lottery Fund for the Tallys an Tir: Stories and Traditions of the Land project

Garry is an associate of the London College of Music, research co-ordinator of the Rescorla Centre and Archive Director of the Cornish Music Guild/Cowethas Ylow Kernewek. He presented the keynote lecture to the inaugural Celtic Representations Conference, Center of British and Irish Studies, University of Colorado (Boulder), and in 2005 became a Board Director of the Celtic Education and Research Network (CERN).

1992 Devon Scholarship to study a PhD in History, University of Exeter

2001 Bard of Gorseth Kernow for services to Cornish history

(with Dick Cole and Bernard Deacon), MK and the History of Cornish Nationalism, Welsh Academic Press, 2003.

The Liberal Party in South-West Britain since 1918: Political Decline, Dormancy and Rebirth, University of Exeter Press, 2000.

‘Methodism and the Music of the Clay Country’, Journal of the Cornish Methodist Historical Association, 9, 4, 2000.

Devolution for the Duchy: The Liberal Party and the Nationalist Movement in Cornwall, Journal of Liberal Democrat History, 22, 1999.

(with Treve Crago), ‘Oral Narrative and Migration: Interpretations of Family, Place and Space’ in Emigration and Immigration: Proceedings of the 2nd International Conference of the Academie Internationale de Genealogie, AIG, 2004.

‘Socialism and the Old Left: The Labour Party in Cornwall during the Inter-War Period’, in P.Payton (ed.), Cornish Studies: Seven, University of Exeter Press, 1999.

Review of Bernard Maier’s The Celts: A History from Earliest Times to the Present in Albion, 36, 2, 2004.

'A Review of the Clay Pilgrimage’, Journal of the Cornish Methodist Historical Association, 9, 6, 2002.