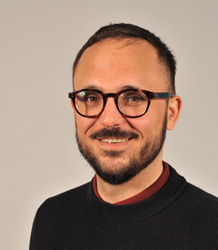 I am a cultural theorist of the body working on representations of sex, health, disease and Nature vis-à-vis biopolitics and the political, philosophical, and technoscientific history the dyad immunity/community.

I am currently working on a second, edited, book project provisionally entitled Viral Masculinities: Contagion, Epidemic, Containment, Paranoia, exploring the role of virality and the figure of the virus in modern and contemporary framings of masculinity. The collection will bring together a group of scholars from a variety of humanities and social sciences disciplines to reflect on various examples of how ideas of the virus/virality pertained to masculinities in the 20th and 21st-centuries, from early information networks amongst civil rights and gay liberation organisations to the history of HIV and the AIDS crisis, digital media, pornography, and the viral disemination of neo-reactionary ideologies online.

I'm a member of the Association for Cultural Studies, sit on the Board of Directors of PSi: Performance Studies international (2017-2022), and was a founding member of PSi's Future Advisory Board (2015-17).

Within that context, I draw from modern and contemporary visual culture, performance studies, queer studies, the posthumanities, and the medical humanities, to probe the permeability of bodies (human and non-human, in both their material and ideological dimensions) to one another, approaching them as porous media interfaces operating at two discrete and yet intersecting scales:

- the macroscopic: individual bodies and collectives, public health, interspecies relations, climate change, and the enmeshment of bio-, geo- and techno-logics in the context of the so-called "Anthropocene";

- the microscopic: the body as a queer multitude of cells, viruses, bacteria, recreational and/or prescription drugs, hormones, proteins, desire and pleasure.

Catherine Gray (PhD in English): Collaborating in the Presentation of Self. Co-supervised with Professor Regenia Gagnier (English).

My teaching tends to privilege a thematic or conceptual organisation rather than a chronological one. Such an approach allows students to challenge some misconceptions of History and to more easily follow visual and philosophical themes and tropes as they have circulated and been reinterpreted along multiple temporal and spatial axes.