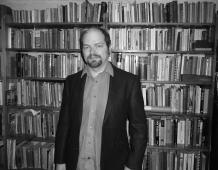 If you need to see me at any other time then email me and we can see what we can arrange.

I would describe myself as a cultural and intellectual historian. My research tends to take a broad approach encompassing many areas of history, especially medical history, history of science, witchcraft, magic, esotericism and religion and, while often being focused on the early modern period, my research has also lead me into the medieval, classical and modern periods. I am particularly interested in the multitude of uses and traditions (both practical and literary) that surround precious stones and using this as a microcosm to observe the interplays of the above mentioned cultural spheres.

I am also interested in History in its wider context in cultural heritage, art, folklore, literature and the built enviroment.

I was born and raised in Mid Devon going to school at Queen Elizabeth's in Crediton. Despite dyslexia I graduated from Swansea University (then part of the University of Wales) with a first in History, having studied a wide variety of topics including anthropology, fascist art, medieval warfare, as well as witchcraft. I then came back to Devon and completed a Masters in History at Exeter before reciving a studentship from the University to undertake a PhD. My (now published) doctoral research focused on the ambitious and original design to trace intellectual and cultural changes in people's attitudes and beliefs towards the 'supernatural' and the natural world in early modern Britian, through the microcosm of the changing beliefs surrounding precious stones. It was supervised by Prof. Alexandra Walsham and Prof. Jonathan Barry and examined by Prof. Stuart Clark and the late Prof. Nicholas Goodrick-Clarke. I have taught before at Exeter and also at Plymouth University.

I am a Fellow of the Royal Historical Society and an Associate of the Higher Education Academy.