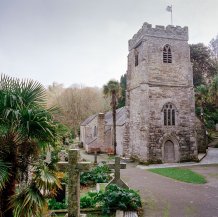 The films show how the religious buildings played a central role in the county’s seafaring past. Historians and students at the University of Exeter have spent the past three years researching how the churches show stories of smuggling, piracy and wrecking, and how religion and the sea have played a key role in Cornwall’s culture, identity and language.

The documentary series, Exploring Cornwall’s Maritime Churches Project, is free for all to watch on YouTube.

The first episode shows how Cornwall is renowned for its folklore and features some of the county’s most magical places – including St Nectan’s Glen, Tintagel, Padstow’s Doom Bar and Zennor. It shows how the sea and the church are at the heart of famous myths and legends, and why mermaids, giants and chivalric knights have emerged from certain places.

The first episode also shows how many folk tales travelled the Atlantic through Cornwall’s participation in the slave trade, and how evidence such as graves and ecclesiastical records can reveal much about the African diaspora in Cornwall, from as early as the Tudor period. Undergraduate students such as Yaz Fosu and Natalie Wragg discuss why it is imperative to not rose-tint these particular narratives of Cornwall’s past.

The second episode shows how fishing, trade and ship building contributed to Cornwall’s distinctiveness and its sense of place – as well as legal and illegal smuggling activities. It shows how the sea has inspired the writing of authors including William Sydney Graham and Daphne Du Maurier. Former fisherman Robert Williams discusses traditional fishing practices, and historian Dr Helen Doe discusses shipbuilding at Polruan’s Lanteglos church. The film shows people’s personal connections to their local maritime churches, and how in turn, these churches reflect their stories through their architecture or decoration.

The third episode shows the history of shipwrecks in Cornwall and how churches have both saved lives and facilitated smuggling. It shows locations including the Lizard Peninsula. As part of the project 15-year-old Lucy Whatley wrote a tribute to shipwrecks and this is read by actor Issy Inchbald and brought to life with powerful music composed by Nerys Grivolas. The documentary shows different ways of exploring shipwrecks, including freediving and scuba diving. It also shows how parts of broken up ships are preserved in maritime churches, and explores why people collect pieces from wrecks – whether this is commemorative or barbaric.

Footage for the documentary was captured by local filmmaker, Kyle Richardson. The films were written, produced and presented by Victoria Jenner.

The film series was produced on behalf of the University of Exeter’s Institute of Cornish Studies.

The research work was conducted by staff at the University of Exeter’s Institute of Cornish Studies and the Falmouth and Exeter Students' History Society. The project was funded by the National Heritage Lottery. It was led by Dr Garry Tregidga, Director of the Institute of Cornish Studies, with Victoria Jenner acting as Project Manager, Rebecca Orchard as the coordinator for the volunteer researchers and Dr Jo Esra advising on research skills and maritime history.