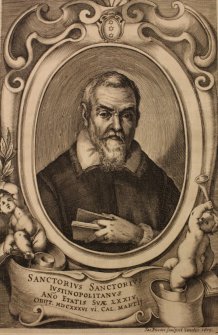 Newly discovered notes show for the first time the Venetian doctor who invented the thermometer and helped lay the foundations for modern medical treatment also played a key role in shaping our understanding of chemistry.

The physician Santorio Santori, who lived between 1561 and 1636, came up with an accurate explanation for how matter works twenty years before Galileo.

Handwritten notes made by Santorio in a 1625 edition of his own book Commentaria in primam Fen primi libri Canonis Avicennae (A Commentary on the First Fen of the First Book of Avicenna’s Canon) show he realised matter was made from invisible ‘corpuscles’. Although the Greek philosopher Democritus and others after him had already maintained the existence of such bodies, historians previously believed that nobody had come up with the proof for their existence before Galileo.

The book, kept in the British Library, was found by Dr Fabrizio Bigotti, from the Centre for Medical History at the University of Exeter. The language used and handwriting style strongly suggest the notes were made by Santorio.

Dr Bigotti said: “This discovery makes the case for a deeper study of early modern chemistry in the Medical School of Padua, where Santorio taught, and the work carried out there between the end of the sixteenth and the beginning of the seventeenth century. Santorio’s true contribution to chemistry has been forgotten but, I hope, this new discovery means that will no longer be the case.

“The notes show he did not see the world not made up of four elemental qualities - hot, cold, dry and moist – as Aristotle had suggested. This helped to start the process of getting rid of the idea that magic and the occult could be found in nature.

“It is truly remarkable that, beyond his undoubted merits in science and early modern technology, Santorio also held very innovative ideas on chemistry and was so fully committed to investigating the structure of matter.”

Santorio had correctly identified the minimal structure of matter as a series of corpuscles as early as 1603, and proved his assumptions by means of a series of optical experiments on light, as well as distilling urine. All these experiments were carried out with instruments Santorio made especially for his own research.

It was already known that Santorio laid the foundations for what is understood today as evidence-based medicine and the study of metabolism. The new discovery shows he was he among the first scientists to suggest the body aims at preserving its own balance through discharge of invisible particles.

Dr Bigotti began researching the life and works of Santorio in 2013. His project is now funded by Wellcome Trust. He outlined this new discovery at an international conference organised with Professor Jonathan Barry, Co-director of the Centre for Medical History of the University of Exeter, in Pisa this month.