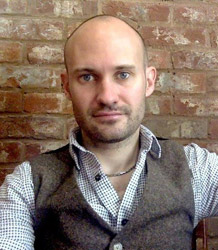 Dr Christopher Stokes is a Senior Lecturer in English at the Penryn Campus. He is the author of Romantic Prayer: Reinventing the Poetics of Devotion 1773-1830 (Oxford University Press, 2021) and Coleridge, Language and the Sublime (Palgrave Macmillan, 2011), as well as many articles on Romantic poets in leading international journals, and the editor of the Selected Poems of Bernard Barton (Anthem Press, 2020). His current research is on occasionality and the informal occasional poem in the Romantic era, and he continues to research Quaker writing of the same period.

His research interests more generally include the intersection of poetry, religion and theology; subjectivity and embodiment in literature; and the history of aesthetics and philosophy more broadly in the Romantic era. His teaching spans across the eighteenth- and nineteenth-centuries.

My research has focused on poetry of the Romantic period, with a strong interest in various strains of philosophical and theological history.

I began as a Coleridgean, with my first monograph Coleridge, Language and the Sublime (Palgrave Macmillan, 2011) attempting to trace a philosophically informed negotiation between the persistence of Romantic idealism, and its failures and withdrawals, across a wide range of his work. The book has been praised as an 'impressive, ranging, perceptive account...[taking] a subject that we throught we knew all about and discover[ing] something new to say about it' (Seamus Perry) and as work that 'one can only hope...will have a significant impact both within and beyond Coleridge scholarship' (Jonathan Murphy review in Romanticism 18.2).

My second monograph project, Romantic Prayer: Reinventing the Poetics of Devotion, 1773-1832 (Oxford University Press, 2021), is a multi-author study which shows the importance of poetry as a key cultural site for exploring the status of prayer at a critical juncture in histories of secularity and faith alike. Contextualised through an extensively researched archive of primary material (e.g. sermons, manuals, guides) on contemporary ideas of prayer, it covers a broad range of writers, from those attached polemically to specific Christian denominations (e.g. Cowper, Barbauld) to those engaged in a post-Christian or atheist interrogation of devotion (e.g. Keats, P.B. Shelley). It argues, ultimately, that no understanding of theism or atheism in literature of the period can afford to overlook the intertwining of poetic language with the language of prayer.

Most recently, I have worked on the Quaker poet, Bernard Barton. This project, which has yielded an article in the Review of English Studies and a Selected Poems, is interested in the broader question of how religious minorities enter, engage and modify the mainstream literary and aesthetic norms of their time: a question sharpened due to the historical opposition to non-didactic literature on the part of the Society of Friends.

Alongside these larger projects, I have engaged in several other fields of research, often impelled by interests in literary and critical theory. These include articles on expression and self in Felicia Hemans and Charlotte Smith, work on urban experience in Wordsworth, an analysis of the eroticised body in John Donne, and a scholarly recovery of the Romantic era 'infancy lyric' - largely minor or anonymous poems, by women, addressed to newborn babies.

I have just started a new, book-length project on occasionality and the informal occasional poem in the Romantic era.

I would be interested in supervising research students in any area of Romantic era writing (of any genre), or poetry from across the eighteenth and nineteenth centuries, and would be particularly interested in taking on projects which have:

a) a focus on Samuel Taylor Coleridge

c) a connection with philosophy, aesthetics or religion/theology

d) an interest in the self, subjectivity and/or the body

e) a methodological interest in any area of literary theory, especially deconstruction

I was involved in the 2014 collaborative project "From a Cornish Window: Individual, Landscape, Community" (part of the nationwide AHRC-funded Being Human festival of the humanities) which aimed to use perspectives from literary studies and the humanities more generally to rethink relationships to space, place and environment (especially in Cornwall).

It involved an exhibition and trail at the Royal Cornwall Museum in Truro, creative workshops with local schools, and a series of public talks. At the RCM, I delivered a lecture on 'Landscape and Lyric', offering an alternative history of Romanticism through depictions of Cornwall.

I was external examiner to the English BA programmes at the University of Chichester between 2016 and 2020.

I enjoy teaching at undergraduate level immensely, and several pieces of my own research have some sort of beginning in conversations and discussions from the seminar room. I am a Fellow of the HEA, having completed the 'Aspire' scheme on joining Exeter, and have over ten years of experience across four separate institutions. My most recent module, which shall begin in the 2021/2 academic year Global Romanticisms: Poetry, Geography, Travel which aims to provide a diverse, global backdrop for a variety of literary genres, ranging across territories including Portugal, India, the West Indies and the Arctic.

I was very proud to receive an overall satisfaction score of 5.0/5.0 (85% response rate) for the 2015/16 iteration of my third year module Extreme States.

I read my undergraduate degree in English Language and Literature at St. Peter's College, Oxford, and then took an interdisciplinary MA, in European Thought, at the Centre for European Studies, UCL. My D.Phil was carried out under the supervision of Professor Nicholas Royle at the University of Sussex, and completed in 2008.