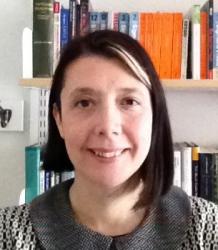 I am Professor in Modern Literature and Medical Humanities. My room is 119 in the Queen's Building.

I have research and teaching interests in modernist, postmodernist and contemporary fiction; medical humanities; modernity and the contemporary; poststructuralism; philosophies of temporality, ethics and affect; psychoanalysis; neuroscience and language.

I have published widely on the work of Samuel Beckett, including a monograph entitled Samuel Beckett: Laughing Matters, Comic Timing (Edinburgh University Press, 2012).  My research has also been centrally concerned with the relationship between modernism, modernity, and early twentieth-century neuroscientific conceptions of language. I am currently writing a cultural history of waiting in modernity.

I work in the English Department and in the Wellcome Trust Centre for the Cultures and Environments of Heath. In the Centre, I am currently leading a critical and creative Beacon project called The Index of Evidence on the relationship between health and evidence in a post-truth context.

With Lisa Baraitser (Birkbeck) I am joint PI on a 5-year Wellcome Trust Collaborative Award called 'Waiting Times' (2017-2022). This project is working to uncover what it means to wait in and for healthcare. I am currently beginning work on a cultural history of waiting in modernity.

My research interests are in modernist, postmodernist and contemporary fiction; medical humanities; modernist poetry; critical theory; modernity and the contemporary; poststructuralism; philosophies of temporality, ethics and affect; psychoanalysis; gender and language; neuroscience and language; the question of evidence.

I am Humanities Lead in Exeter's Wellcome Trust Centre for the Cultures and Environments of Health (directed by Prof Mark Jackson).

I am interested in supervising PhD students working in the following areas: modernism (broadly, but particularly Samuel Beckett); interdisciplinary approaches to literature and neuroscience; medical humanities; psyshcoanalysis and literature; modernism and critical theory; literature and ethics; literature, temporality and affect.

Please feel free to email if you would like to discuss your prospective project informally.

I have teaching interests in modernist, postmodernist and contemporary fiction; medical humanities; modernity and the contemporary; poststructuralism; philosophies of temporality, ethics and affect; psychoanalysis; neuroscience and language.

After studying for a BA in English and European Literature at Warwick University, I completed an MA in the Theory and Practice of Modern Fiction at Exeter University in 1996. Following this, I studied for a PhD at Birkbeck College, University of London, which I completed in 2003. From 2003-7, I was a lecturer in Modern and Contemporary Literature at Birkbeck, and was then awarded an RCUK Fellowship in Science, Techology and Culture (2007-13). In 2013, I became Reader in Modern and Contemporary Literature.

I am part of the first generation of my family to sudy at university.