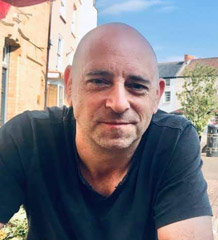 I am a Senior Lecturer in Victorian Poetry and I am the Director of Online Learning for the College of Humanities. I have a specific interest in working-class and politically engaged poetry of the mid-nineteenth century. My previous research has culminated in the monograph The Poetry of Ernest Jones: Myth, Song, and the 'Mighty Mind' (Oxford: Legenda Press, 2016) and an article in the Spring 2015 issue of Victorian Poetry entitled 'The Poetic Negotiations of a Gentleman Radical'. I have published three volumes of original poetry, Little Machines (Knives Forks and Spoons Press, 2009), Unless Otherwise Stated (KFSP, 2011), and Adverse Camber (2019). I also have an interest in the works of Anthony Burgess and I have broadcast on that subject.

I have been Principal Investigator on a large-scale AHRC-funded project collecting and studying Lancashire Cotton Famine poetry published between 1861 and 1865. The project involves several public events and has created a publically accessible database housing hundreds of poems written by ordinary people. http://cottonfaminepoetry.exeter.ac.uk/

My last AHRC-funded research project examined the poetry of the writer and Chartist, Ernest Charles Jones (1819-69), with attention paid to its historical, cultural, and political contexts. Jones’s privileged social background, German upbringing, and eventual imprisonment alongside working-class Chartists, provide ample opportunity to illuminate the cross-cultural implications of his political career and thought through his poetry. Subjects covered by my research include the influence of German Romanticism on British radical aesthetics, poetic mythopoeia, radical appropriations of Victorian medievalism, prison poetry, and early Victorian working-class cultural production. Jones’s close association with Marx and Engels, his contributions to the Leeds Northern Star and Notes to the People, and his role as the last leader of the Chartists, have given him prominent historical status, but his influential poetry has never before been the subject of a full-length study.

I am currently Principal Investigator in a large-scale AHRC-funded project examining Cotton Famine poetry published between 1861 and 1865 in standard English and Lancashie dialect. In conjunction with the Exeter Digital Humanites team,  I am developing a publicly-accessible database of Lancashire Cotton Famine poetry. Although Lancashire Dialect poets have been studied as a group  and separately, poetry of the Cotton Famine, including its unique aspects of multiple address and function, and fascinating reactions to the American Civil War, has received scant critical attention, and the bulk of the poetry remains uncollected in Lancashire newspaper archives.

My current research into Lancashire Cotton Famine poetry is being developed in close collaboration with my Co-Investigator on the AHRC-funded project, Professor Brian Maidment of Liverpool John Moores University.

I am open to discussing supervision of research projects realted to my academic expertise. I would be particularly interested in propsals related to the following subjects:

I have links with, and membership of, several literary societies including the Elizabeth Gaskell Society, The International Anthony Burgess Foundation, The Barbara Pym Society, and The Mary Webb Society. I have carried out extensive peer review work for the newly established Revenant journal based at Falmouth University. My contribution to the discipline consists of a uniquely sustained focus on working-class political poetry of the mid-nineteenth century, having completed a large scale study of the Chartist poet, Ernest Charles Jones (1819-69), and currently developing work on poetry of the Lancashire Cotton Famine. One of the achievements of the former project was to critically situate the poetry of Ernest Jones within the existing Victorian canon.

My current project aims to identify, collate, and interpret the poetry of the Lancashire Cotton Famine.

I am an associate member of the HEA and my teaching practice is informed by my research interests. I am currently convening the core first-year module, The Poem EAS1038, and I have designed and convene a successful third-year option module, Poetry & Politics EAS3408.