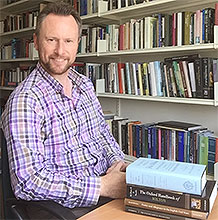 I was born and went to school in Belfast and then studied at Cambridge and Oxford. An interview I did with The Guardian some years ago about my route into academia and the origins of my research interests can be accessed here.

For several years I have been working on a study of the intellectual development of Milton, focusing on his early life and writing up to the outbreak of the English Civil Wars. Poet of Revolution: The Making of John Milton was published by Princeton University Press in October 2020. It is available as an audiobook and a Chinese translation is to be published by Guangxi Normal University Press. The book featured in a news story in The Sunday Telegraph; an extract can be read on Literary Hub and podcast interviews can be heard on, for example, Princeton Ideas Podcast, Sparks of History, and Artidote. Poet of Revolution has been chosen as one of the five 'Best History Books of 2020' on Five Books and there are reviews in, for example, the Los Angeles Review of Books, Prospect, the Catholic Herald, History Today, the Times Literary Supplement and the London Review of Books. It has been awarded the James Holly Hanford prize of the Milton Society of America for the most distinguished book published in 2020. I am currently completing the sequel, contracted to Princeton University Press, which covers the second half of Milton's life. New work on Milton and free speech can be read in Aeon and on the astonishing recent identification of Milton's copy of the Shakespeare First Folio in The Seventeenth Century.

My research has been recognized by the award of a Philip Leverhulme Prize in Modern European Languages by the Leverhulme Trust, and four of the annual awards of the Milton Society of America for the most distinguished publication on John Milton (the Irene Samuel Award for a collection of essays in 2011, the James Holly Hanford Award for an essay in 2013, and the John T. Shawrcoss Award for an edition in 2015, as well as the James Holly Hanford Award for a monograph in 2022).

My recent work on the cultural politics of literary translation and transmission in 17th- and 18th-century Britain and Ireland, focusing on translations of the great French satirist Rabelais, was assisted by the award of a Research Fellowship from the Leverhulme Trust and a Maddock Research Fellowship from Marsh's Library, Dublin. Essays derived from this work have appeared in Renaissance Quarterly, Renaissance Studies, and the first volume of the Oxford History of the Novel.

Before coming to Exeter I was a Research Fellow of Fitzwilliam College, Cambridge; visiting fellowships have included a period at the Institute for Advanced Study, Princeton. Among administrative roles, I was Director of Research in the Department of English at Exeter in 2011-13 and 2015-17, in which capacity I oversaw the 2014 REF submission and advised colleagues on all aspects of publication, grant application, and public engagement.

Professor McDowell has recently supervised AHRC-funded doctoral students working on Milton, Marvell and Anglo-Dutch relations and on Milton and materialist philosophies. One recent student, Dr Esther van Raamsdonk, is now British Academy Post-Doctoral Fellow in English at the University of Warwick. Currently he is supervising students workng on topics including Milton and utopianism and Milton as a reader of the Bible. He will be pleased to discuss potential doctoral projects relating to literature and culture in Britain, c. 1500-1750.