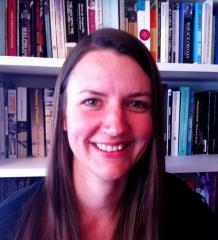 My research is motivated by a fascination with counter-communities and the role of literature in promoting, critiquing and helping to form them. Initially centred around the work of the American postmodernist Thomas Pynchon, these research interests led to the publication of my first monograph, Thomas Pynchon and American Counterculture with Cambridge University Press in 2014. Since then, my focus has expanded to include ‘post-countercultural’ writing (by Pynchon, Acker, Reed, Bambara, and Vizenor) of the 1970s. Further interests include literary representations of gender and sex, intersections between politics and economy in fiction, and twenty-first century critical approaches. These interests are reflected in two edited essay collections, Pynchon, Gender, and Sex (Georgia UP, 2018) and The New Pynchon Studies: Twenty-First Century Critical Revisions (Cambridge UP, 2019), as well as a special issue of Textual Practice (2019) on Pynchon and economics.

My office hours for the autumn term 2021 are Mondays 09.00-11.00 and Tuesdays 16.00-17.00 via Teams. Please book via the following link: https://outlook.office365.com/owa/calendar/JoFreersOfficeHours1@UniversityofExeterUK.onmicrosoft.com/bookings/

Dissertation students please note that I will be on maternity leave from December 2021 so I will be unable to supervise dissertations in 2021-22.

My primary area of research interest is post-WWII American literature, in particular formally-experimental prose, political fiction (especially 'oppositional' postmodernism), Native American literature, and utopian and dystopian fiction. Theoretically, my research is informed by postmodern theory, poststructuralism, ecocriticism; by theories of the local and the global, postcolonial and decolonial, affect, gender and sex; and by work in sociology, history and economics.

I am currently working on a monograph on the formal and political Anarchism of work by Kathy Acker, Thomas Pynchon, Toni Cade Bambara, Ishmael Reed, and Gerald Vizenor.

I aim to provide teaching that is intellectually challenging, but also supportive and friendly. In reflection of my own approach to research, I often emphasise in my teaching the political and historical dimensions from which a text speaks.

I am currently a Fellow of the Higher Eduation Academy.

I grew up in a town on the outskirts of Leicester, and attended state school before going to the University of Sussex in Brighton to study English literature with Italian. I spent my third year as an Erasmus exchange student at Universita degli Studi di Roma Tre, in Rome. Following my degree I taught English language for a year in Valencia, Spain, before returning to the UK to do my MA in English: Issues in Modern Culture at University College London. In 2008 I returned to Sussex to do research for my PhD, which was awarded in 2012. My thesis was entitled '"A little parenthesis of light": Pynchon and the Counterculture,' and examined the political philosophy expressed in the writing of the American postmodernist Thomas Pynchon via analysis of his texts' responses to various groups, individuals, theories and movements of the 1960s counterculture, with chapters on the Beats, the New Left, the psychedelic movement, Black Power, and the Women's Movement. I remained at Sussex as an Associate Tutor for three years. I've been employed as a Lecturer at the University of Exeter on a series of fixed-term contracts since 2015, with a break for maternity leave in 2018-19.