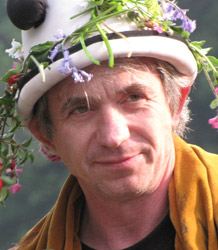 I use performance in all my research projects - currently 'The Follies' pierrot troupe, 'Uncle Tacko's Flea Circus' and the 'Raree Man & his Peepshow'.

I am working with Teignbridge Town Council on animating the seafront for the summer months 2020.

I am working with Exeter Culture exploring the possibilities of public realm activities for the city centre.

'Resorting to the Coast' with Tendring District Council.

Tony has been a showman, researcher and teacher for over 35 years. He specialises in historical popular entertainment forms and their application to contemporary contexts. Tony was awarded a doctorate for his research into itinerant British performance forms by the University of Exeter, where he now teaches. He regularly writes about the subject for academic journals and general interest magazines, as well as broadcasting on both radio and television. Tony was founder of ‘The Pierrotters’ - Britain’s last professional seaside pierrot troupe, with whom he performed for 27 years as ‘Uncle Tacko!’