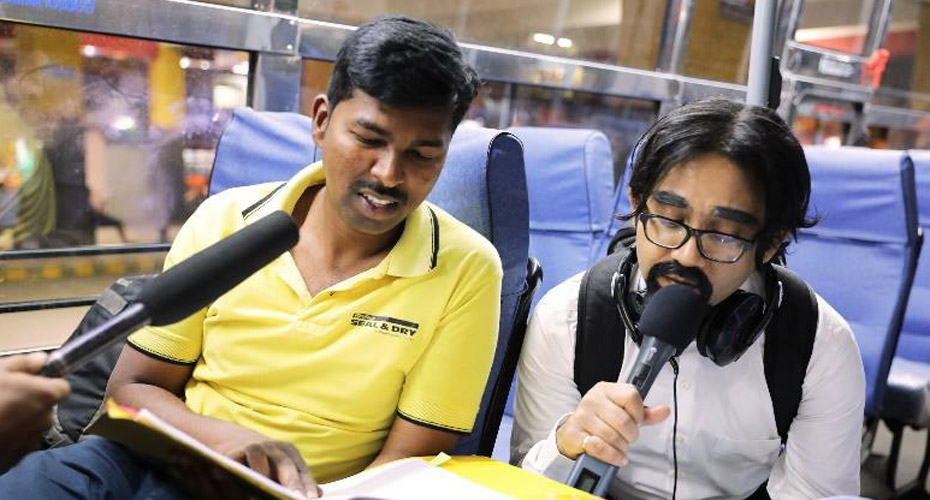 As part of the AHRC/GCRF research grant ‘The Politics of Performance on the Urban Periphery in South India, Cathy Turner worked with South Indian artists to commission work in Bengaluru and Kochi.

Cathy drew on her walking practice with Wrights & Sites to wonder about its application in a South Indian context. In this curated series, locally-based artists considered the ways in which art might prompt inclusive discussions of the social tensions of street spaces in Bengaluru and Fort Kochi.

The four works in Bengaluru each answered an initial prompt for a contemporary, performative re-interpretation of the ‘inscription stones’ that mark the history of Bengaluru in places across the city; however, they each took their own direction and followed the initial interests of the artists. Abhishek Hazra spoke with passers-by about the local language, Kannada, in his fictional guise as a market researcher for an IT start-up. Arts organisation Maraa wove a walking audio performance around campus locations, drawing on dialogues about sexual harassment in university contexts. Lawai BemBem created a walk-through science fiction section of bookshops and with a dialogue in half-known languages to consider ideas of the ‘alien’, in oblique reference to her experience as a migrant from the north. Smitha Cariappa walked the bifurcated site of a lake, where pollution, poverty, worker’s dwellings, lakeside scaping and luxury apartments sat alongside each other.

Turner also collaborated with emerging artists on an artists’ publication (A ‘Mis-Guide’) designed for Fort Kochi, Kerala, 2019. Designed to work alongside the international art biennale that takes place here, it offers an alternative exploration of place, drawing attention to local detail, spatial inequality and marginalised histories.

This process developed through a workshop held by Sumitra Sunder (curator) and Vipin Danurdharan for the artists (Smija Vijayan, Manu Mohan Pallivathukkal, Amal Pailey, Rithun Manohar, Kunjikuttan Narayanan), who then produced sketches, paintings and collages responding to their explorations of the locale. Cathy later walked with them to the places that had inspired the work and through dialogue developed a framing text to facilitate the reader’s engagement with place and ideas, while also locating themselves imaginatively.

The practice was supported by research collaborators at the National Institute of Advanced Studies; Bengaluru, India.