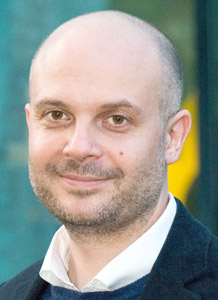 My main interests are in spatial and temporal representation in the humanities - both in the ancient world and the modern one - and the paradigm of Linked Open Data to relate online resources about the past. This is most notably as director of several projects associated with the Pelagios Network, including the development of the Recogito annotation platform.

I am a Fellow of the Society of Antiquaries of Scotland and in recent years have directed the Cluny Hill Dig.

My research interests lie in two distant but related fields: the development of geographic thought and representation in Antiquity and the Middle Ages, and the emerging role of the Web as a transformational medium for communicating and connecting complex information.

Since 2013 I have directed several projects funded by the Andrew W. Mellon Foundation associated with the Pelagios Network, a collaboration between researchers, memory institutitions and educators worldwide to facilitate the use of Linked Open Geodata in the humanities. Along with supporting a variety of initatiatives through its Working Groups and Resource Development grant programs, we have developed two award-winning pieces of software: Recogito, an online platform for Semantic Annotation of texts, images and datatables ('Best Tool or Suite of Tools', DH Awards 2018), and Peripleo, a demonstrator semantic search engine ('Best Data Visualization', DH Awards 2016).

I have an ongoing interest in the cartography of the ancient world. In recent years I conducted a statistical and morphological analysis of the Geographike Hyphegesis ('Geography') of Claudius Ptolemy (c. 150 AD) that clarifies the framework of temporal meridians around which was constructed. A separate study has shown the close relationship between the Peutinger Map (originating c. 4th century), and a coastal itinerary described in the Ravenna Cosmography (c. 700 AD). This has helped to provide to define a plausible extent for the missing portion of the former, in turn shedding light on its original purpose.

In addition to these I am investigating an Iron Age hillfort on Cluny Hill, Scotland (see Fieldwork)

The Pelagios Network is a formal association and partnership of over 25 research initiatives and institutions around the world.

I am open to discussing research proposals on any relevant subject given my research expertise. I am especially happy to consider working with candidates with interests in the following areas related to the digital humanities:

I am also happy to supervise/co-supervise PhDs in:

If you are interested in undertaking a PhD on these topics, please send me a 500 word outline of your research proposal and a copy of your CV.

Through archival work in 2015 I confirmed the presence of a 'lost' Iron Age hillfort on Cluny Hill, Forres, Scotland.

Since then I have directed a season of survey and two seasons of the Cluny Hill Dig, a community excavation run by the Friends of the Falconer Museum and funded by the Heritage Lottery Fund and Berry Burn Community Fund. The results have shown it to be one of the largest and earliest hillforts in northern Scotland, with evidence for iron and bronze production.

I have an extensive history of working with Digital humanities initiatives and organisations internationally, in particular

I am Chair of the Executive Board of the Alliance of Digital Humanities Organisations (ADHO), a coalition of 10 Digital Humanities organizations worldwide that promotes and supports digital research and teaching across all arts and humanities disciplines, acts as a community-based advisory force, and supports excellence in research, publication, collaboration and training.

I co-convene two modules on Digital Humanities as part of the Liberal Arts programme. These are available to all undergraduate students in the College of Humanities or SSIS, space permitting.

I am originally from Moray, Scotland. My first degree was in Philosophy at King's College, Cambridge, following which I spent several years as a language teacher and healthcare software developer in Berlin, Germany. In 2003 I began a part-time MSc in Archaeological Computing at the University of Southampton, and then worked for two years as an IT Officer at Oxford Archaeology South. In 2007 I returned to Southampton to do a Computer Science PhD on 'Archaeology and the Semantic Web'. Following a brief post-doc on Reflectance Transformation Imaging (RTI) at Oxford's Ioannou Centre I became a Lecturer at Southampton's Archeology Department where I worked for four years. In 2015 I moved to Lancaster University's History Department as Senior Lecturer in Spatial History. In 2017 I joined the University of Exeter's Department of Classics & Ancient History and Digital Humanities Lab as Professor in Digital Humanities.