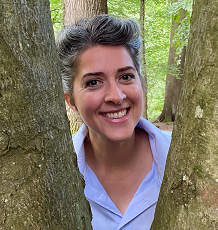 I am interested in how we learn about the world with and through texts, and particularly enjoy topics and concepts in ancient didactic poetry which intersect with modern philosophy and physics. I am currently PI on two AHRC grants looking at present and future landscape decisions and agricultural ethics, and Co-I on a large NERC grant looking at memory in trees and climate change. I enjoy the pluralistic aspects of Classics, and often work with other disciplines and non-academic partners.

My research centres around Latin hexameter poetry (in particular the authors Virgil, Lucan, and Lucretius), and texts such as Seneca's Natural Questions, especially where they initiate a discourse with 'science', geography, and philosophy. In recent times I have worked mainly on didactic poetry and its reception, and especially Virgil's Georgics.

Space and landscape: I am particularly interested in agricultural landscapes and practice, environmental ethics, and in environmental approaches to literature. I have worked with local farmers and artists in Devon (see e.g. here), and have been awarded two grants as PI (working with the Cultural Geographer John Wylie), both part of the 'Landscape Decisions: Towards a new framework for using land assets' call. Both grants utilise Virgil's Georgics and interrogate understandings of cultural value in relation to narrative, time, and agricultural ethics. Field\work is an AHRC SPF Research Network, and Field || guides is an AHRC SPF Follow-on project; both projects began in February 2020.

I am also the Arts and Humanities Co-I on a recently awarded grant called MEMBRA, which is part of the UKRI-NERC 'Future of UK Treescapes' programme. MEMBRA (Understanding Memory of UK Treescapes for Better Resilience and Adaptation) will study how trees can adapt to stress alongside using the concept of memory to integrate a science-and-humanities perspective on how best to enhance the resilience of UK Treescapes. The project will demonstrate experimentally whether and how trees can remember past stress conditions and transfer these memories to descendants through epigenetics-based DNA modifications. This new awareness will also advance our understanding as to how an appreciation of tree-memory, and the language of memory, can influence human decision-making capabilities and our moral relationship with treescapes.

I am interested in space more broadly, especially imagined space, and this includes the conversations and ideas about cosmological and astronomical space seen in texts such as Manilius' Astronomica and Aratus' Phaenomena. In 2017-18 I held a UoE Education Incubator Fellowship, leading a project called 'Locating Imagined Spaces' with Leif Isaksen.

Time and consciousness: including as experienced in death and in the imagination; in spatial understandings of time, and the concept of distance.

Cognitive Humanities: especially texts and multimodality, spatiality and temporality, memory, perception and mental visualization. On this latter I co-organised (together with Felix Budelmann) a conference on 'Cognitive Visions: poetic image-making and the mind' (https://cognitivevisions.wordpress.com/) which is in the process of becoming an edited volume. I also co-manage the Cognitive Classics website (https://cognitiveclassics.blogs.sas.ac.uk/). I am very interested in the two-way direction of neuroscientific research and the humanities.

Classical Reception: especially in British and American literature and art of the Long Eighteenth Century, and of the last quarter of the 18th and into the Romantic period in particular. I work or have published on the reception of Lucan, Lucretius and Virgil in authors such as Percy Bysshe Shelley and J. Hector St. John de Crèvecœur, and artists such as Henry Fuseli. I am also interested in different ways of thinking about reception beyond the chronologically linear, as explored in the grants mentioned above. I serve on the Editorial Board of Classical Receptions Journal (OUP).

In general, I enjoy the close philological detail of traditional classical approaches (my PhD thesis was a commentary on a section of book IV of Lucan's Pharsalia), and I also enjoy opportunities that allow me to work and collaborate with those in other disciplines (e.g. Geography, Physics, History of Art, English, and the Cognitive Sciences) and beyond academia.

I enjoy research supervision a great deal and am always happy to talk to potential candidates on potential supervision related to any aspects of my research.

Ryan Denson (2019-) 'The Depths Below: the supernatural lore of sea creatures in antiquity'

In 2018 I worked with the artist Laura Hopes and the farmer Mary Quicke on a project called 'Ingenious Soil', which was informed by Virgil's Georgics. The two AHRC grants I currently hold involves work with a number of artists, and also includes arts-informed educational work with Beaford.

I feel very strongly about fair access to higher education, and my career has been characterized by a firm commitment to outreach and widening participation activities. Whilst at St. John's College, I initiated the 'St. John's College Classics Essay Competition', and I have been involved in giving a large number of school talks since being a postgraduate, both to students (of all ages) and to teachers.

My research on classical reception in art has led to my working collaboratively with various art galleries, and I am always keen to establish further such links.

I serve on the Editorial Board of Classical Receptions Journal (OUP), am on the Editorial Advisory Board for the Ancient Cultures, New Materialisms EUP series, and am a Council Member and Trustee of the Roman Society.

I have taken part in two television documentaries, both of which (coincidently) were filmed, rather glamorously, in Naples. In 2015 I was approached to be a talking head on the National Geographic documentary 'Map of Hell', directed by Julian Jones. In 2018 I took part in 'Akala's Odyssey', directed by John O'Rourke; you can see a clip of Akala and I talking about dactylic hexameter here.

I particularly enjoy and encourage students to connect the words, texts, concepts we discuss in class to the world we live in and the lives we lead. To that end (for example) I often run field trips to local farms and vineyards within my final-year courses to help consider text and practice, and try to create communities beyond the classroom via social media. I am interested in diversifying the types of assessment on offer, and have a creative/reflective assessment wihtin the Didactic course.

I have been nominated for several Student Guild Teaching Awards since coming to Exeter, including 'Best Lecturer', 'Most Supportive Staff Member', 'Best Personal Tutor' and 'Pastoral Support Award'. In June 2020 I was lucky enough to win the 'College Star' Teaching Award.

I am a Fellow of the Higher Education Academy, have previously been the department Director of Taught Postgraduates, and am currently the Co-Chair of the College Ethics Committee.