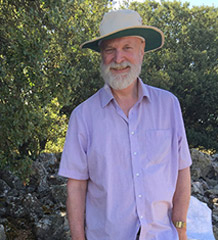 I research the army of the Roman Republic and especially its camps and installations. Much of this work looks at the Roman army's activities in Spain. It combines critical study of classical literary sources and the archaeological remains. I regularly go to Spain to visit libraries, archives and the actual sites. Some of these visits have been supported financially by Spanish state-funded research projects and by the University of Alcala.

Recognition of this work saw me becoming a Fellow of the Society of Antiquaries in 2014.

Mike Dobson is an internationally-recognised authority on the army of the Roman Republic and especially its camps, with numerous publications on the subject. His research combines critical study of classical literary sources in combination with archaeological remains. Recognition of this work saw him becoming a Fellow of the Society of Antiquaries in 2014.

This work has focussed on the most significant group of camps for the early history of Roman camps, situated in the area around Numantia in Spain and excavated in the early twentieth century by the famous German archaeologist Adolf Schulten. The research has included assessing the relationship of what was found to the writings of the ancient historian Polybius, who provides our main contemporary source for the nature of the Roman Republican army and its form of encampment. The result of the research has been a radical rethinking of established views on the theoretical form of the Roman camp, the evolution of Roman army organisation and the nature of what existed at Numantia. His publications on Numantia have been received with widespread critical acclaim and are frequently cited. He is acknowledged as one of the few experts on this highly important collection of archaeological remains. Hence the main pressure group in Spain seeking to protect the area from modern development requested a supporting letter from him which they could publish; and he was consulted by the Spanish film company MLKproyectos during the planning of a documentary about Adolf Schulten.

For the 2017-18 special exhibition about Adolf Schulten and Numantia, held at the archaeological museums in Alcala and Soria, he was listed on the display board of researchers as the only UK scholar currently working on this topic. The exhibition was visited by over 25,500 people. From 2018 his name and interpretation of some of the remains at the camps at Renieblas are shown on the permanent visitor display boards.

His research has led him to receive several invitations to conferences in Spain and to be the only English academic invited to a colloquium on the early Roman conquest of Spain, held in Bordeaux in 2010, where he gave a paper and chaired a session - La guerre et ses traces. Conflits et société en Hispanie à l'époque de la conquête romaine (IIIe-Ier s. av. J.-C.). Colloque International. Institut Ausonius, Bordeaux, France. November 25-27, 2010. There, the Spanish, French and German delegates made ready reference to his work and included his illustrations in their own talks. Recognition of his research on Numantia received due publicity through an article published in Current World Archaeology.

He has worked collaboratively with Spanish and German archaeologists based in universities and in the German Archaeological Institute Madrid on research projects looking at Numantia and more recently at the Roman military remains relating to the Punic Wars in Spain. He has also been approached by archaeologists in, e.g. America, France, Germany and the Czech Republic to enter into correspondence about Roman camps in general.

Acknowledgement of his reputation can be seen in him being asked to provide supporting recommendations for funding applications for research on Numantia by Spanish and German archaeologists.

He was requested to support the award of a Doctorado Europeo in Roman military archaeology for a PhD thesis written by a Spanish postgraduate student - Las Estructuras de Almacenamiento de Grano en el Occidente del Imperio Romano presented by Javier Salido Domínguez to the Universidad Complutense, Madrid. The Doctorado Europeo was awarded in 2010.

His research on Roman camps goes beyond the Iberian peninsula, with him carrying out widespread study of late Republican and early Imperial fortifications in Germany, France, Austria and Switzerland. Part of this study was made possible by a three-month research grant from the Deutscher Akademischer Austauschdienst (German Academic Exchange Service). For the 2017-18 special exhibition held at the archaeological museums in Alcala and Soria, about the work of the German archaeologist Adolf Schulten and his excavations at Numantia, Spain, in the early twentieth century, Mike was listed on the display board of researchers as the only UK scholar currently working on this topic.

The exhibition was visited by over 25,500 people.