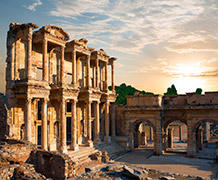 Did the Greeks and Romans really think like us?

Dr Richard Flower, Senior Lecturer in Classics and Ancient History, is producing a series of podcasts, named ‘The Distant Pasts’, investigating aspects of ancient Greek and Roman life that we might recognise today, for example social attitudes and beliefs.

During each podcast, Dr Richard Flower interviews an academic about a particular topic and discusses unusual and unexpected ways in which ancient attitudes diverge from the modern. In addition, the academics are also asked what they would like to change about the ancient world. The inspiration for the podcast series came from the observation that modern discussions of the ancient world frequently draw parallels with the present day, sometimes unhelpfully. For example references are made to things in the modern world that are said to have caused the fall of the Roman Empire which are then used to predict behaviours of modern political entities.

Richard said: “I really enjoy talking to experts from all over the world about their research and lifting the lid on some surprising and unfamiliar aspects of the classical world. It's really important to realise that the Greeks and Romans had radically different attitudes to us in many ways, even though many people view them as the founders of 'Western civilisation'. The past is not just the present day in fancy dress.”

The podcasts cover a range of different topics, including faith, sex and death. In a recent interview Maria Wyke, Professor of Latin at UCL, discusses the portrayal of life in the Rome world in modern films, and traces the development of cinematic presentations of the ancient world for a variety of purposes. The most popular podcast to date is Tim Whitmarsh, A. G. Leventis Professor of Greek Culture at the University of Cambridge, talking about faith and atheism in the ancient world, which is also the subject of his recent book, ‘Battling the Gods’.

The podcast series started in 2015 and is sponsored by the UK’s Arts and Humanities Research Council.