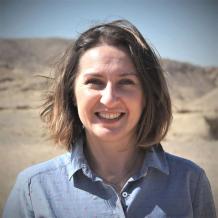 I am a bioarchaeologist with a background in human osteology, palaeopathology and funerary archaeology. I combine my research with teaching and an extensive fieldwork programme in the Nile Valley – in Egypt and Sudan. My expertise lies in the archaeological excavation and examination of mummified and skeletonised human remains, using established protocols and state-of-the-art techniques. I am particularly interested in exploring the relationship between people and their environments in the past through patterns of health and disease, subsistence and migration.

My first research project at Saqqara, Egypt, aimed to identify patterns of health distribution in respect to different social classes within the local past population, and to establish the extent to which the observed patterns of social and biological status changed over the period of use of the cemetery from the late Old Kingdom to Graeco-Roman times. This topic continues to hold relevance in modern societies where extenuating economic pressures impact on the state of health of families across the social spectrum. My study of the ancient population at Saqqara, which is ongoing since 2006, has contributed to our understanding of the lifeways and health and disease in Ancient Egypt, including evidence of rare conditions (e.g. multiple epiphyseal dysplasia), infectious disease (e.g. tuberculosis), and metastatic cancer.

My research on commingled remains from disturbed burials at the Theban Necropolis featured in the National Geographic documentary Lost Treasure of Egypt, and was conducted as part of the Life Histories of Theban Tombs project based at the University of Basel, Switzerland.

In 2016, I was awarded a Marie Skłodowska-Curie Research Fellowship, funded by the EU's Horizon 2020 research and innovation programme, based at the University of Warsaw. My research sought to investigate environmental changes as a causative factor for the collapse of the Kingdom of Meroe (300 BC - AD 350) in Sudan, using stable isotope analysis of human remains, with the specific focus on the impact of environmental changes on the pattern of human habitation and migration, subsistence, and physical health.

In collaboration with the National Corporation of Antiquities and Museums (NCAM) in Khartoum, Sudan, my project aimed to promote and enhance appreciation of the importance of curating human remains as a valuable resource in studies pertaining to the interaction of people and their environment in the past. It also intended to highlight the problem of overexploitation of the natural environment and the profound effects these changes could have on human populations, past and present.

I continue my investigations into the circumstances surrounding the collapse of the Meroitic Kingdom with a new project entitled Crossing Boundaries: Peoples' Movement and the Collapse of the Kingdom of Meroe (300 BC - AD 350), Sudan, funded by the National Geographic Society grant (NGS-61475R-19). This project aims to investigate the genetic background of selected archaeological populations from northern Sudan to infer movement of peoples during the Meroitic and Post-Meroitic Periods (c. 300 BC – AD 600). Establishing DNA profiles of the archaeological populations from Meroitic and Post-Meroitic sites in Sudan should shed light on the impact of demic movements during that time and assist with understanding the contribution of migration to the collapse of the Meroitic kingdom and the subsequent formation of Christian kingdoms. This project is carried out in collaboration with NCAM and the Harvard Medical School.

For the list of my publications see the following:

Since 2002, I have been actively involved in archaeological research in the Nile Valley, working with international teams at high-profile burial sites in Egypt (Tell el-Farkha, Saqqara, Theban Necropolis) and Sudan (Kawa, Jebel Moya, Hamadab, el-Zuma). I have also worked in commercial archaeology in the UK.

Public engagement remains an important element of my academic work and research, providing opportunities to share my knowledge of ancient civilizations, and life and death in past populations.

During my fieldwork seasons in Egypt and Sudan, I enjoy developing and delivering training courses in the field to share with students and graduate archaeologists the methods of recovery, identification and inventory of human remains. Since 2018, I have developed and co-directed courses and study days for the Bloomsbury Summer School at UCL, focusing on the current state of research in the Nile Valley pertaining to human and animal remains, and their place in the cultural context of Ancient Egypt and Nubia.

I am passionate about teaching and sharing my knowledge by engaging students of all ages and abilities using a combination of captivating lectures and hands-on laboratory-based sessions. I continually strive to incorporate current pedagogy to develop courses which appeal to a variety of learning styles on varied topics relating to ancient civilisations, funerary archaeology, and bioarchaeology. I pride myself on providing an open and supportive learning environment by encouraging debate between students.

I hold academic degrees in Archaeology (MA, Adam Mickiewicz University in Poznan), Human Osteology and Funerary Archaeology (MSc, University of Sheffield) and Bioarchaeology (PhD, University of Manchester). Since 2002, I have been actively involved in archaeological research in the Nile Valley, working with international teams at high-profile burial sites in Egypt and Sudan.

ILM Level 5 Award in Leadership in Management, awarded by the City and Guilds of London Institute